It’s all about perspective, I guess… 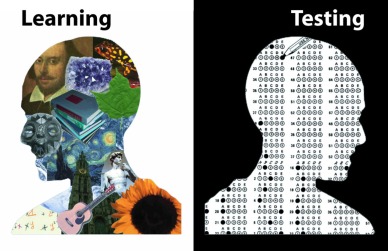 The ISTEP went off more or less completely without a hitch today; the closest thing to a complaint that I have is that I probably should have swapped late-afternoon groups with the other teacher who was administering tests today, because somehow I ended up with mostly her kids and she ended up with mostly my kids.  The technical issues that destroyed several days of last year’s testing were close to nonexistent today and when they did show up were easily dealt with.   I don’t have much of a sense of how they did, but they didn’t seem terribly upset by the test; I decided this year that I was going to do my best to pay no attention to their answers.  I can’t affect it anyway at this point; their scores are what they are.  I haven’t tested my 8th graders yet– they’re tomorrow– but we got through the first day so I can’t imagine that subsequent days are likely to get worse.

The disadvantage: I didn’t think losing my prep period was going to be that terrible of a problem, but I think I need to bring snacks or something with me to work tomorrow, because I ended the day exhausted and have been eating like a fiend since I got home.  I’m literally pausing between sentences right now to rub queso dip all over my face like some sort of animal; I wish my tongue were longer because that would make eating it easier.  I’ve got the exact same schedule tomorrow except worse, since I’m staying after school to do my Algebra tutoring group, so I won’t be home until six or so.  Gotta bring some granola or something.

More fiction tonight, I hope– I ended up getting 4500 words written yesterday, which is *awesome*.  I won’t equal that tonight but if I can get another thousand down it’ll be a good day.  Maybe another blog post, too, once my brain wakes up.  Whee!

Writerpeople:  what software do y’all generally use?  I know I’ve got some fans of Scrivener out there, which despite several tries I’ve never really been able to get into; anybody use anything else that I need to know about?  I came across this article on Lifehacker the other day that led to me downloading a bunch of new programs to try out (including Fade In, a screenwriting program– I have a secret desire to write a screenplay for some reason; maybe that can be a side project this summer) and I have completely fallen in love with FocusWriter.

Dudes, I wrote four thousand words of fiction today, and it wasn’t even difficult.  That’s not unprecedented– I did nearly twelve thousand during the closing days of NaNoWriMo several years ago while under deadline pressure, and once wrote a thirty-page paper in three hours flat in grad school– but to get four thousand words done in a single day when there is no pressure whatsoever to perform is so unlike me as to be faintly alarming.  Other apps do the same main thing FocusWriter does; it blacks out the entire screen, letting you choose a theme (I have basic white text on a black background; you can choose other colors or even use an image as the background) and hides its entire UI so that all you can see is your text on the screen.  Awesomely, it also has a setting to make freaking typewriter sounds when you hit keys, which– for me, at least, which may be a sign that I’m moderately nuts– is weirdly, insanely rewarding.

Anyway: point is, BA 7 is done, meaning that all I have to do is finish BA 6 and do one last edit/polish/clean-up run on the entire thing and then The Benevolence Archives, Volume 1 is ready to be unleashed unto the world.  Which is awesome and terrifying all at the same time.   Hell, I’m on such a roll I may see if I can finish 6 tonight.  Why not, y’know?

I love productive days.  ISTEP starts tomorrow so the rest of the week is going to be obnoxious and stressful; I’m glad today wasn’t.  How are y’all?

A student walks up to me.  He’s got a huge shit-eating grin on his face.

“I’m going to take control of your body and your brain,” he says to me, “and then you’re going to give me a Jolly Rancher.”

“You are now breathing manually,” he says.

He got his Jolly Rancher, the little bastard.

(Very long day.  Including positively Hobbit-like levels of both First and Second Breakfast. This is all I have, but hopefully it got a smile out of you.)

The really scary thing is that I’m pretty sure I ought to throw a “Part 2” up there after the title, but I don’t precisely remember what the other post was about, and Christ does the tag “standardized testing” give me a lot of entries to wade through.

(Ah, right: here.  Apparently this is becoming a theme.)

I already talked about how I had to waste a day last week giving all of my students the mandatory ISTEP practice test.  I left a bit of the story out– because, honestly, at the time I’d forgotten all about it, but it popped back into my head while I was taking a shower earlier today and I feel like I ought to pass it on.  My Honors kids, due to a smaller number of nonsense behavior/noise issues and a lack of technical problems, finished the test a good fifteen minutes before any of my other classes did, so they got a fair amount of time to screw around on the Internet before the end of class, since bringing them back to the room for half an hour of instruction seemed a) somewhat pointless and b) slightly punitive.

My main job, then, for the last half hour or so of my class, was basically just to wander around and make sure nobody was trying to look for porn.  Half of the kids were on Google Maps exploring foreign cities (I love that this is what they chose to do with their time, by the way) and the other half were playing Minecraft, so no problems on that end.  At one point I looked outside– one entire wall of the lab is windowed, so I can see anything going on in the hallway– and saw the teacher I’ve been mentoring all year out in the hallway outside the library with a couple of her kids.  Wanting an adult to talk to for a moment, and having a class of kids who I could safely monitor through a wall of glass, I wandered out into the hallway to say hello.

At this point I discovered that the conversation they were having was somewhat more… hmm… fraught than I’d suspected from inside the computer lab.  One of her girls had just told another student that she was planning on running away from home, and that student had, to her credit, immediately told the teacher about it.  There are certain protocols that we’re to follow under these circumstances, obviously, but generally talking to the kid for at least a few minutes before dumping the entire thing into the lap of the school social worker is a good idea, and the teacher was doing just that.  I stayed out there long enough to make sure she felt like she had a handle on everything and then went back into the lab, since I could tell the girl wasn’t terribly comfortable continuing the conversation with me standing there.

Later that day, once school had let out, I ran into the other teacher in the hallway again and asked her what had been going on with the girl.  Turns out she’d just been told, the night before, that she was adopted.  Sixth graders not being terribly reasonable creatures, she’d internalized this information not as “my adopted parents love me so much that they picked me to bring home,” which I think everyone would kind of have preferred, but as “no one loves me at all, and I should go away.”

My first thought, I swear to God, was Why the fuck did they do that to her the week before ISTEP?