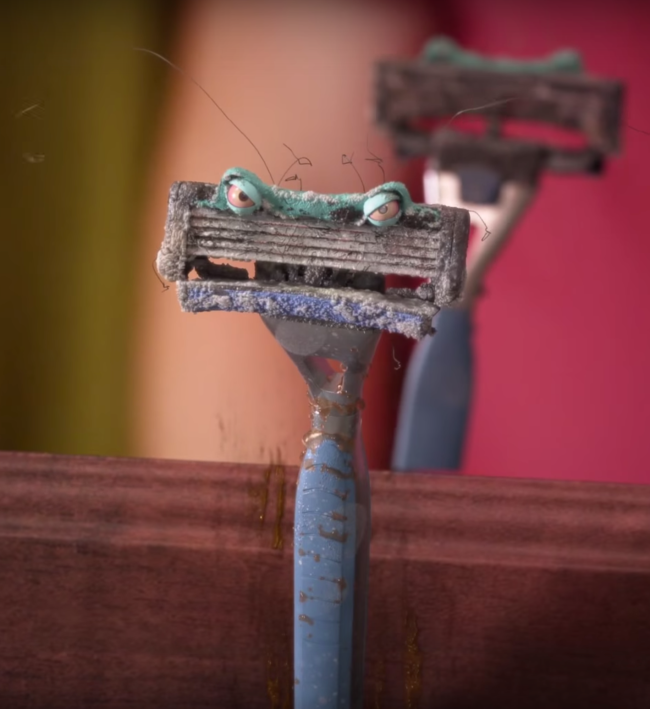 If you shave your head in a hurry while you’re getting ready for work in the morning, and then once you get to work you discover a huge patch right above your left ear which somehow you appear to have missed entirely, and since you were a couple of days behind on shaving your head anyway that patch looks like you left it there on purpose, the pocket knife that you keep with you at all times is not going to be remotely sharp enough to carefully correct the problem in the men’s room before the store opens.

I am going to start keeping a couple of cheap disposables in my car, is what I’m saying.

What stupid things did you try to do today?

I’m Luther Siler.  I’m a writer and an editor.  Welcome to my blog, infinitefreetime.com.

I’m the author of Skylights, available for $4.95 from Amazon, and The Benevolence Archives.  Benevolence Archives, Vol. 1 is 99 cents from Amazon.  Volume 2, The Sanctum of the Sphere, is $4.95.  All three books are available in print as well, and the print edition of Sanctum includes BA 1 as a bonus!   My newest book is a nonfiction memoir about teaching called Searching for Malumba: Why Teaching is Terrible, and Why We Do It Anyway.  The ebook is $4.95 and the print edition is $15.95.

Autographed books can be ordered straight from me as well.

Here’s where to find Luther Siler on the interwebtron:

One of our local radio stations does a bit called Group Therapy in the morning, which is usually airing just as I’m driving the boy to school.  The general pattern is this: they pose a problem, submitted by a listener, that should generally be easily dealt with by anyone with an average middle schooler’s level of sophistication and emotional intelligence.  They do not provide enough information about the problem to allow listeners to give useful advice, and people who like hearing their voices or names on the radio submit useless advice on Facebook or on the air so that the person involved can do whatever they were going to do anyway.

I’m going to start listening to Pandora more in the morning, is what I’m saying.

This morning’s problem was as follows: a parent’s 11-year-old has stolen their credit card, for the second time.  It wasn’t made perfectly clear, but it seems that as of the time of the advice-asking, the boy still had the card.  He had used it to buy $50 worth of drinks and snacks from a local convenience store and not to, say, order hundreds of dollars worth of electronics from somewhere, which is what you’d think most kids would do with a credit card they’d stolen.  Anyway, this parent had reported the card stolen, and apparently under the (incorrect) idea that the police would show up if the kid attempted to use the card again– which, yeah, right— was wondering if he/she should just talk to his/her kid or let the police “scare him straight.”

And all I could think of, listening to this, was that the person asking for advice and every single one of the dumb motherfuckers providing (generally approving) advice for the latter piece of advice had to be white.  Because every black parent in America knows that you do not let the police anywhere near your child unless someone is guaranteed to die if you don’t.  There are no optional encounters with the police.  Fuck, I’m white and I live in a nice neighborhood and I’m never calling the police again unless somebody is under serious immediate physical threat.  And you’re gonna call the police on your baby because of a $50 credit card bill?  Your privilege is not only showing, it’s leaking out of the dashboard of my car, and I ought to be able to charge somebody to clean that shit up.

(Leave aside the ridiculous notions that 1) the police care about a $50 fraudulent credit card charge because they have nothing else to do and 2) they have time to help you with relatively routine parenting decisions.)

Which brings me to Angie Thomas’ The Hate U Give, or THUG for short.  The title of the book is a Tupac reference; Pac was fond of the backronym, explaining, for example, that “nigga” stood for “Never Ignorant, Getting Goals Accomplished.”  “Thug Life,” to Tupac, meant “The Hate U Give Little Infants Fucks Everybody,” and the meaning of that phrase is discussed throughout the book.

The story is told through the eyes of Starr Carter, a sixteen-year-old black girl.  Starr is the sole witness when a policeman murders one of her oldest friends during a traffic stop.  Her friend, Khalil, was unarmed and unresisting when he was shot.  The rest of the book spins out from that one moment; the different sections are even dated by it: “Three Weeks After It Happens,” and such.

You can probably predict the overall story beats from the premise, right?  America knows this story pretty Goddamn well by now, and the tension here is less from what happens (anybody want to put money down on whether the cop is exonerated by the grand jury or not?) than how the people in the book react to it.  Starr herself is a fascinating character; she lives in a rough neighborhood but her parents scrape and save to send her to a private school 45 minutes away, so many of her best friends aren’t black and she thinks of herself as being two different people, one at school and one at home.    Her uncle is a police officer, her father a former gang member.  Khalil himself has a complicated backstory, and the book dives into the inevitable attempt by the media and the police to slander him and make him responsible for his own murder.  For a large portion of the story Starr’s school friends and her (white) boyfriend aren’t aware that she’s the anonymous witness the news keeps referring to, and the way she reacts to their treatment of Khalil’s death is complex and fascinating.  Her navigation through the web of relationships and identities she’s struggling with throughout the book is a pleasure to read.

I recommend books here all the time; I rarely bother to review anything I didn’t love unless I think I can hate it in an entertaining way, but it’s not terribly often that I use the word important to describe a book that I’ve read.  You need to read THUG, and you need to get THUG into the hands of as many other people as you can, particularly young people.  Angie Thomas’ writing is crisp and clear, Starr herself is a wonderful character, and I can’t wait to get my hands on more work by this author.  Go read this book.  Do it right now.

Tonight I bought the boy a Pokémon sourcebook and a bunch of cards in a tin on the way home from work, then once I got home I put together my new Raspberry Pi and downloaded a bunch of Nintendo games onto it.  And the original Atari 2600 version of PITFALL!, which was mostly for my mother.

I thought it was going to be a pain in the ass, honestly, but the whole thing worked like a charm.  There’s a weird audio issue where it won’t keep a consistent sound level, but I suspect I can suss out what’s causing that given some time and adding new games to the system has turned out to be damned easy.

He went from deliriously happy to be playing Mario to nearly throwing his first controller within five minutes, so I figure I’m doing something right.

What games from the Super Nintendo and original PlayStation era should I be downloading?  I missed those the first time around; my parents wouldn’t buy me either of them.  🙂

Instead I’m gonna collapse into bed and try not to die.

It was kinda a long day.