TL;DR version: May was a damn good month.

First, the Spreadsheet of Doom for the last 3 months, in illegible mode.  Click to make this into something you can read:

Now, even in its current unreadable state, you should be able to perceive some good news. Red days are days where I had no sales– and remember, a “sale” is a download regardless of whether I got paid for it.  The last day I had zero downloads of one of my books was April 19th.  I had zero no-sale days in May, which is fantastic.  And unprecedented.  That’s never happened before.  Hell, I only had four days in May that didn’t feature multiple sales.

I had a total of 175 sales in the month of May.  The majority of those were for Benevolence Archives, Vol. 1, which is free everywhere but Amazon– a total of 105.  73 of those were through OpenBooks.com, which I’ll need to devote a longer post to later, and which is currently my most active vendor.  The amazing thing is that even if you cut the OpenBooks sales entirely out of the total I still tied my best month of 2015.  The Sanctum of the Sphere  had 39 sales, and Skylights had 31.  My best day was, unsurprisingly, May 9th, which was the day of the signing.  I had 52 sales across all of my vendors.  Again, though, a testament to the strength of the month: you can delete all 52 of those and I’m still way over where I was in April.

I do not expect to hit 175 in June, although I’m probably going to do an end-of-the-school-year sale of some sort, so who knows.  July will be interesting as I’ve got a three-day con in Indianapolis that I’ll be attending.  We’ll see how well it goes.

But yeah.  I’m ecstatic at how the month went.

I spent the last couple of weeks trying to push my Twitter following again.  I think I’ve decided to get up to 10K and then spend at least a month or two sitting back and monitoring activity levels before trying to fiddle with it again.  I discovered that Twitter’s mucking about with their Analytics page again, and not in an entirely positive way, although some of the stuff is okay.  But check this nonsense out:

Where the hell’s the X-axis, Twitter?  Is that daily?  Monthly?  Hourly?  What the shit?  This is no way to do a bar graph.  And while we’re at it, what in the blazing hell does “Ethnic Explorers” mean?

Problematic, right?  No math teacher would allow that graph to see the light of day.  It gets worse.  I use Crowdfire to control my various additions and deletions, and it recently prompted me to download a companion app called Stats.  Which I did.  And which gave me this: 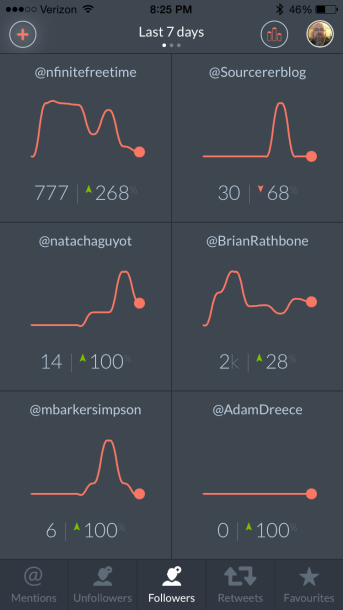 That’s no axis at all.  Those are literally just weird little lines that don’t mean anything.  Now, if I click on any of those icons, I can drill down and get slightly more specific data, but there are still weird, contextless line graphs that provide absolutely no useful information of any kind.  Okay, my follows are up 268%.  From what?

Dreece’s line, by the way, has got to be wrong– he’s also showing no unfollowers for the last seven days and I don’t believe for a second that anyone’s account has that little churn.  Dude’s got nearly 3000 followers.  Something changed last week.

So, yeah.  A step in the right direction, sorta, maybe, but Jesus, people, take some stats classes.

John Kerry broke his leg while cycling in France today, and it got me wondering: What level of bodyguarding/security do we provide people like upper-level Cabinet members and members of Congress when they go overseas?  The article mentions Kerry’s motorcade but doesn’t give any indication of who was in it.  Does the Secret Service handle stuff like that, or do they just work with the President and VP?

Yes I know I could Google this.  I’d rather ask y’all; somebody out there knows.

Spent the morning idly cleaning, ordered books to sell at InConJunction, and spent the rest of the time since I woke up wondering what in the world I had to write about.

Answer is “not much,” and I’m working in a couple of hours, so this seems like a good day to take off.  Have a song:

…I have no idea how to market a sequel.

I do have a plan for my writing career, such as it is, and keeping Benevolence Archives, Vol. 1 free or close to it everywhere I can is part of that plan.  My next two books will be a nonfiction stand-alone and the sequel to Skylights, and once Skylights has a sequel it’s not going to go free but the price is going to drop pretty substantially.  (Don’t hold your breath.  I’ve written two paragraphs, and don’t plan on getting much farther for a bit.)

But the sequel to Benevolence Archives is already out!  It’s called The Sanctum of the Sphere, and it’s right there to the right of these words!  And it’s pretty good, if you ask me, which you probably shouldn’t since I’m biased.

Here’s the thing, though: I think SotS stands alone pretty well, but I haven’t had many people who haven’t read BA 1 read it and get back to me yet.  It’s got a Twitter-unfriendly name.  And I haven’t found a way to market it on its own independent of BA that I like.  The plot’s not super nutshellable and it doesn’t have a monkey, which half of my most successful Tweets about Skylights have mentioned.  The print edition is an omnibus, and contains both books, so that’s easy– and to date I think I’ve sold more print copies than I have ebook, which is actually kind of astounding.  But the ebook isn’t doing as well as I’d like.

(Reads what he just wrote)

Hell, I’m not even sure that’s true.  I’ve sold fifty copies and the thing’s been out a month.  That’s not bad at all, at least comparing it historically to my other books.  I guess what I’m getting at is I need to learn to figure out how to a) market a series as opposed to an individual book, and b) figure out how to market individual pieces of a series independently of each other.

Which is awesome, because it’s not like I’d mastered marketing for individual books to begin with.

…have a flower from my back yard.