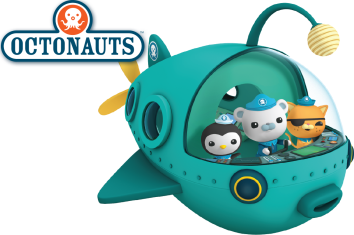 So here’s the new hotness:  Octonauts, a show about British (mostly) animals (mostly) who live underwater in a giant octopus and Do Science.  Most of them, as I said, are various flavors of British, and their accents are region-specific.  Then there is the one with the southern accent (and by “southern accent,” I mean “southern US”) and what might be an attempt at a Mexican accent, maybe, since the character’s name is Peso?  Only they’re all done by British voice actors, and they are perhaps done by British voice actors who have never met southerners or Mexicans, because the southerner (“Tweak,” the rabbit) sounds like the worst stereotype of a toothless Mississippi white-trash hick you’ve ever heard and the Mexican accent sounds so un-Mexican that I thought the character was supposed to be Asian at first.

Here are the Octonauts.  They are so, so, so British, even the ones who aren’t British.

You’ll recall I said they were mostly animals.  Note the plant on the right.  His name is Tunip, but I thought it was Turnip until seeing it in print just now.  The rest of the characters have personality and agency; Tunip and his other plant-based lifeforms appear to be either vegetable-based Oompa Loompas or actual slaves, and they really don’t fit into the rest of the show very well.  It’s bizarre.

At any rate: Every episode involves the Octopod tooling around in the ocean and dealing with some sort of sea animal’s problem, or sometimes the sea animals are the problem.  The animation is kind of cool and the ocean backgrounds are really neat even without the massive, Thomas the Train-level Britishness.

There’s a weird colonialism thing going on here, too:  the white … polar bear? in the middle up there is Captain Barnacles, who has the Britishiest of the accents, and he’s in charge.  He’s supposed to come off as this nineteenth-century naval captain dude.  In practice, this means that he assumes in any situation that whoever he’s dealing with will understand and assume that he’s rightfully in charge and what he says is the best thing for everyone.  Even if it’s a indigenous culture species of animal they’ve never seen before, obviously everyone ought to just agree with what the white animal thinks.  He’s the Captain!  Don’t you understand what that means?

Then there’s always a song at the end.  It’s the Creature Report.  It lives in my brain now, and I hear it all the time, everywhere I go, no matter what, forever.  Let it be in your brain now:

I like the show.  It makes me crave crumpets, and I don’t know what crumpets are, but I like it.  That said, if I try to drift off to sleep one more night with the Creature Report running through my head, I will kill a substantial portion of the Midwest’s population.