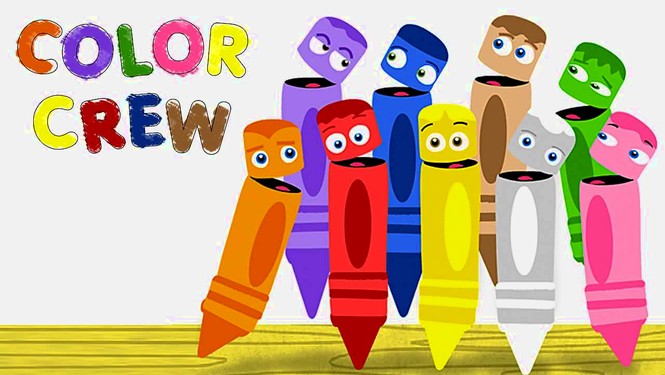 So this “Color Crew” program is the new shizz around here for some reason.  TV for little kids is always deeply weird on one axis or another; this may be the weirdest program he’s ever wanted to watch, with the possible exception of “WordWorld,” which isn’t allowed into my house any longer.

Color Crew is the story of ten crayons.  The ten crayons are basically identical except for Purple, who is high as hell, and Green, who is… special.  The intro song sets up the basic premise of the program:

See, the whole thing is about competing for the hat, which has magical powers and allows the Color of the Day the power of speech.  The crayon’s only allowed to say its name, though, so it’s not actually that great as a superpower.  The crayons all hop around and compete for the honor of wearing the Hat, which always goes to the fourth crayon in line, a fact that they seem not quite bright enough to have figured out yet.  Then that crayon and the crayon to its left get to go color a picture.

Coloring a picture is very exciting!  The pictures exist in a  weird world without perspective, though, so it’s entirely possible that the piggy bank on the bed is 2/3 the size of the entire bed, or the two cherries on a plate are going to be the same size as the entire piece of cake on the plate next to it: 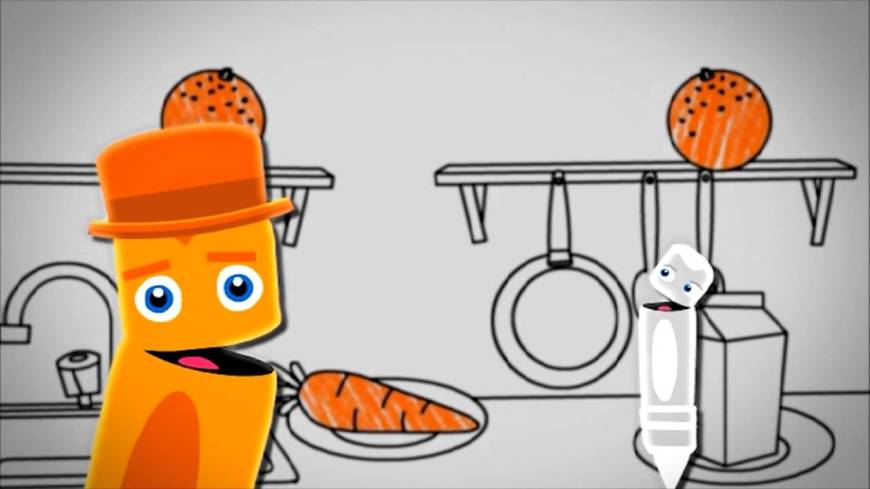 Note the relative sizes of, say, the two oranges, the frying pan, and the carton of milk.  Which is, inexplicably, on a plate.  Somewhere underneath them will be some built-in shelves each holding a single carrot.

Anyway, as you can see, the Color of the Day gets to color some of the things in the picture!  This is very happymaking for everyone involved, and the crayons get rather indecently excited about it.  Like, there are crayon boners going on, I swear.  Sooner or later, though, the color of the day will stop shrieking his name over and over again and get a liiiitle bit too excited and color something the wrong color.  Objects in Color Crew world, you see, can only be one color, ever, and the other colors will tolerate no bending of this rule.  The mixture of horror and sadness on the face of the other crayon when something gets mis-colored cannot be expressed properly in language and must be seen to be believed.

The Angry Eraser is a terrifying mixture of a shop teacher from a 1970’s teen movie and Adolf Hitler.  He exists to destroy art and color and is perfectly happy with his role as Pure Evil.  He glares hatefully at the miscreant crayon, destroys their horrible mistake, and then grins like a fucking pedophile maniac and skids back off screen.  At which point the Color Overseer recolors the deviant portion of the page and everyone gets back to work.  Sooner or later all of the crayons zoom in, at which the picture unaccountably becomes colored with markers instead of crayons:

The whole thing is weird and creepy, so naturally my kid loves it.  How long until he can watch Walking Dead with the wife and I?