I’m not dead. Just taking a bit of a break.

I killed my Clark Kent personal account over there several months ago and haven’t missed it, and I keep side-eyeing Luther Siler’s account and in particular Luther Siler’s page, which has 245 Likes at the moment.  I don’t really do anything with the page other than use it as a reblogger for posts, and I discovered to my extreme displeasure over the weekend that that hasn’t been actually happening for several months now.  There are no relevant Help documents on either WordPress or Facebook that are actually useful; I found some dark mutterings on the WP site about how Facebook won’t allow auto-publication to a profile any longer, only a page, but the page is what I’ve been trying to post to and what every visible indicator tells me I have been posting to.

My big knock against dumping Facebook lately has been not wanting to lose the traffic.  Apparently I’m not actually losing any, though, since I’m not posting anything over there and therefore any clickthroughs that are happening are not happening from my posts.  The new problem is the number of conventions and events who seem to organize most of everything through FB.  It would be nice to be able to still keep an eye on those things, y’know?  I hate the site and I’ve literally hated it since the first time I ever heard about it, but I think I’m still stuck with it and its shitty design and its shitty everything.

It would be nice if the shit just worked at least a little bit like it’s supposed to.

I am, in general, very skeptical of “give it a chance, it gets good later on” types of arguments for anything I had to spend $60 to get.  For $60 you need to be fun in five minutes and you need to stay fun for however long your game ends up being, and I’d rather have a lean, entertaining 30-hour game than a 100-hour game filled with … well, filler.

I’m nonetheless very, very glad I stuck this one out– I just beat it half an hour or so ago, although I’ve left a number of the mop-up tasks for later.  I may or may not get back to them.

But: forget the game for a moment.  Spider-Man PS4 is one of the best Spider-Man stories I have ever encountered, in any medium.  Comics, movies, whatever.  And even that, as I said in the piece from earlier today, takes a good long time to get rolling.  But once it does … wow.  I was in tears during the final act.  I’m not gonna bullshit around.  I’m a grown-ass man and a video game just made me cry because the story was that good and they get this character that thoroughly.  Fucking tears.

And then, the three movie-style stingers after the credits?

Can’t wait for the sequel.  And if they put the same people in charge of writing it, I’m not gonna have shit to say about the gameplay.   Because with a story this good, I’ll chase fucking pigeons all day if I have to. 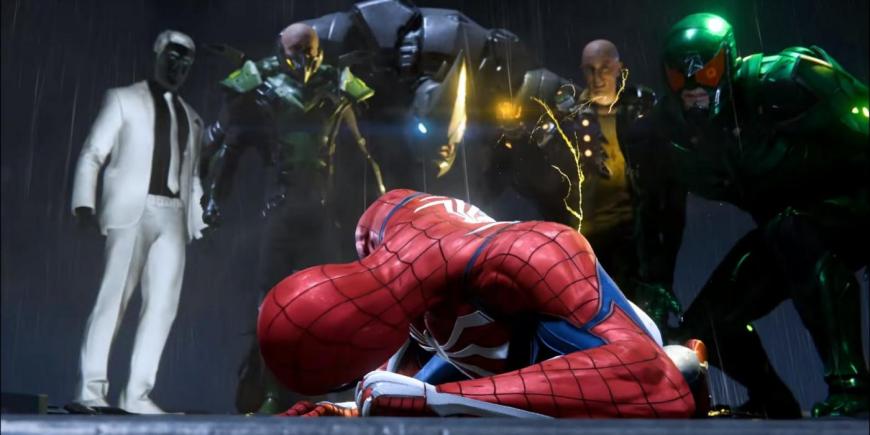 Yeah, I know.  Another Spider-Man post.  Lucky for you, this website’s free.

I’ve quit playing this game forever at least three times now.  There are still a number of things about it that are enormously goddamned annoying, most of them related to the endless number of side tasks they put all over Manhattan for you to do.  Yes, I know I can ignore these things, but they’ve actually done a really good job of incentivizing hitting every stupid little glowy mark on the map and I’m enough of a completist that I have trouble ignoring shit like this even in games without good incentive systems.  I’ve got this game firmly slotted in Witcher 3 territory, another game I quit playing a whole bunch of times, where the shit that annoys me is just never going to stop being annoying and I need to focus on the stuff I like.

… which, holy shit, when this game is firing on all cylinders it is ridiculous.  And I got to a point last night where something happened that I absolutely wasn’t expecting to happen at all: the game surprised me.  Like, a lot.  At about the 70% mark.

That’s not a thing that happens very often.

It’s difficult to balance an open-world game properly, right?  These things must be utter hell to code.  You want your game to have some sort of main storyline, usually expressed with some sort of discrete mission structure, but you also want your players to explore, so you sprinkle a few dozen enemy bases and a few dozen side missions and a bunch of  things that you’ve scattered 40 of around the map for people to find and stuff like that.  This game has a mission where, no shit, you’re supposed to find and recapture a dozen pigeons for some random guy.  These pigeons fly at the speed of a military jet for some reason.  You gotta catch ’em all.

But the thing is, your “main story” missions have to be compelling enough that they get done, but not so compelling that players ignore all the other stuff that you want them to do.  You want them to be able to take a couple of hours and go hunt for backpacks or glowy orbs or whatever it is that you’ve scattered fifty of all over the place.  This will break immersion if your main missions have a ton of immediacy to them.

And up until the beginning of Act 3, I’d say Spider-Man wasn’t doing a bad job of straddling that line.  Do a mission, go find some backpacks, do a mission, clear out a couple of bad guy hideouts, do a mission, find some pigeons, take some pictures of New York landmarks, move on.

And then Act 3 hits, and the criminals at Riker’s Island all break out, and the criminals at the Raft, the nearby superpowered prison, all break out, and all the sudden Electro, Mr. Negative, the Rhino, the Vulture, the Scorpion and Doctor Octopus are all beating the shit out of you at the same time– not that it actually affects gameplay, but Spider-Man mentions fourteen broken bones the morning after escaping the beating– the whole fucking city is on fire and Doc Ock releases a massively contagious bioengineered virus that you quickly find out has already infected half a million people by the time the first mission properly ends.

Also, two of the six supervillains up there spend a big chunk of the game being mentors to Peter Parker, so there’s all kinds of personal angst wrapped up in suddenly discovering they’re evil.

Shit gets really dark, really quick, is what I’m saying, and all the sudden the idea that you’d stop doing missions to catch pigeons stops feeling like a fun diversion and more like criminal negligence.

I had to force myself to quit playing and go to bed last night, and I went several missions in a row back-to-back-to-back just because the conditions the game set up made it impossible for me to believe doing anything else was remotely reasonable.  Like, I hope shit goes back to normal soon, because there’s still a couple of pigeons out there that need catching.

(I hate catching pigeons.  But I’m going to do it anyway.)

Also, while I’d prefer to have a powered Miles Morales in the game, every single scene between him and Peter has been absolute gold.  This game gets Miles really, really well.  I want the sequel to star the kid.

Red Dead Redemption 2 came out on Friday.  The first RDR is one of my favorite games ever.  Reading between the lines of some of the early press, I’m worried that the sequel isn’t going to work for me. Part of the reason I’ve been playing Spider-Man so much this week is that I want it off my plate so I can play RDR2.  It would be deeply upsetting if I didn’t like this game, especially if I’m following my usual “I don’t like playing this game, and the whole rest of the world loves it” thing that I’ve been so good at for the past few years.

I will, of course, keep y’all posted, since it’s not like I talk about anything other than my PlayStation around here anymore.

and I’m going to punch some bad guys, hug at least one of my cats and go to bed early.