I have a stupid job, or maybe I have a nonstupid job and I’m just a stupid person.

As I was driving to the gas station on my way to OtherJob this evening, praying for the fumes in my gas tank to keep the car moving until I got there, I drove past a couple of my students. They all know what my car looks like, so I honked the horn and waved and pulled into the gas station, maybe a block or two farther down the road from where they were.

Two minutes later, as I’m filling the tank and cursing how much the price of gas has jumped over the past week or so around here, they come running over to say hello. They ask where I’m going and I tell them OtherJob; they say they’re on their way home and are supposed to be home by five.

I look at my watch. It’s not too far from five already.

And here’s where my job is stupid. Any other person in any other situation upon running into a couple of people who he knows and likes and who happen to live along the way he’s already travelling would say yes to this instantly. It’s common bloody goddamn courtesy. But since I’m a teacher I have to go through this stupid mental calculus where I weigh how much I trust these two girls and whether I can trust their parents to not be stupid idiots before I throw all that to the wind and decide to treat them like they’re people and not my students and agree to give them a damn ride home, like somebody who isn’t a complete asshole.

Note that this may actually have broken the law. Not a joke.

It isn’t until I’m pulling out of the parking lot that the real bullshit of this transaction hits me: I’ve just had two teenage girls run up to me in the parking lot of a gas station, they’ve gotten into my car, and I’ve driven away. I make a joke about it and look around for blue-and-whites; luckily, no one official appears to have noticed. Which is a bit of a relief.

The drive home takes all of five minutes and is uneventful. Then I nearly kill one of the little idiots when she darts in front of my car after getting out instead of going around behind it like a sensible person.

That would have been fun.

That’s actually happening, by the way– or, at least, the writing of the proposal part of it.  I’m going to propose that they fund the following:  1) Attendance at a (week or so long) writer’s conference of some sort, preferably somewhere in Chicago or similarly nearby; 2) self-publication of my novel Skylights, and 3) Keeping me from having to work for a few weeks in the summer to work on another novel.

I need to emphasize that regardless of how ridiculous this might sound this is actually the type of thing that they seem to fund.  Like, I’m already talking to people about cover art for the book.  It’s premature as hell, obviously, but I need line items for the budget.

More later, possibly, as I’m expecting work to be dead due to Notre Dame’s first home game being this afternoon. 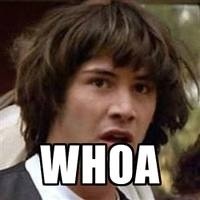 I had been thinking that the challenge this year was going to be the Algebra class. Two weeks in, I’m pretty sure I got that one completely wrong. Granted, we’re still mostly in “review” territory, but the Algebra kids are moving along swimmingly; if anything I could probably be pushing them faster if I really wanted to.

On Tuesday, the school counselor walked into my room, shoved a roster under my nose, and told me to eliminate six of my kids.

“Permanently?” I said, eyeing a certain set of the roster.

“To (other teacher’s) room,” she said, and I started looking at a different set of kids. She then showed me a different list, which contained the six kids that she was moving into my room– special-needs students, each and every one of them. Turns out that it had been decided that I was going to co-teach with one of our special ed teachers during those class periods, and they’d decided to consolidate all the available special education students into my room out of the two seventh grade math classes that were available.

(Weird, true fact: There are two different kids who would have been on my list if I was consigning them to the flames, but were not on my “willing to send to someone else” list. I’m not sure what that says about me. Certainly not that I’m sparing the other teacher. The impulse is more “no one is your math teacher but me” than anything else, and I certainly insisted on protecting the kids who I had last year. I dunno.)

Teachers who read this will all recognize this anecdote: you know how sometimes you’ll get a writing assignment turned in from a kid, and it’s so bad that you literally don’t have any idea how to correct it? That the only thing to do is start over completely, and by “start over completely” I mean “wipe the kid’s brain, send him back to kindergarden, and reeducate him entirely”? Where there’s simply no way to correct the thing without entirely redoing it?

I’ve had that impulse in writing classes many, many times, unfortunately. I have never had it in math before, in twelve years of teaching, until this week– and this week I had it with four different kids. I have two students with sub-60 IQs, and another pair of boys who I don’t even want to talk about on account of their plethora of learning disabilities and neurological disorders. Plus at least four kids who are severely autistic (two of whom, just for the record, aren’t actually in this class) and two with massive behavioral disorders.

I’ve never co-taught before; I don’t know precisely how it works, and the special ed teacher, who has spent all week buried in beginning-of-year paperwork, has been content to sit back and let me drive the bus for now, although that will probably change as we get to know each other and find some time to actually collaborate. And I’ve never, ever had a class this low before. I’ve got two kids in there who were among my lowest students last year (although they both showed genuinely impressive gains over the course of the year) and this year they are the smart ones.

And now you know why there’s a Keanu pic at the top of this post.

I am at a middle school football game. It is a hundred million degrees and I am wearing work clothes, including my lanyard, and I am anticipating a massive scalp/neck sunburn because there is no shade anywhere.

Later, I will hunt for tile.

We appear to have lost, which is sad– I had to leave early for the tilening, which didn’t even work out to much– we weren’t able to find what I had declared the Perfect Tile at our Lowe’s when we went to the Lowe’s that is closer to my parents’ place, although we did manage to make an appointment for a guy to come out and measure our bathroom and tell me how deep the buggery going to be once they come over and tile for us.  (We have discussed it.  We are not tiling ourselves.  The reason:  we don’t wanna.)   The demolition is still scheduled for this weekend and I’m still not exactly sure how that’s going to go.  But I’m looking forward to blogging about how wrong it went.

My brain is full of lesson plans and bathroom budgets and complicated interior design plans and to-do lists for work and meeting scripts and IEP reading and surface areas and bathtub sizes and tiles and vanities and is also working hard on how to get a proposal written that will get me ten thousand dollars to do fun and relaxing summer stuff with.

My belly, meanwhile, is full of pizza.

This is just to say that there will be no blogging today.

Instead, have a music video: