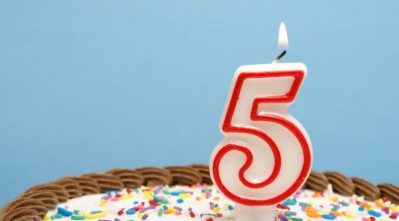 This is the fifth anniversary of the beginning of this blog.  Starting tomorrow, it will be my longest-lived Web presence.  My very last post at my original blog site at Xanga, of blessed memory, was also a fifth anniversary post, but by that point the blog was all but abandoned anyway and I just happened to notice and post on the right day.

Amazingly, this is also a milestone for the number of posts I have made on the blog.  It is, believe it or not, post number two thousand and five hundred.  I have somehow averaged five hundred posts a year over the last five years, a number that I don’t even believe, except that I’ve checked it half a dozen ways and WordPress is insisting that it’s true.

It is rather difficult to express just how important writing for this site has been for me over the past five years.  I can’t really say that it’s brought me fame or fortune, but seeing as how this is the site that has launched my writing career (such as it is) it has genuinely changed my life.  I’ve written six books during that five years, started a company, and started going to conventions to promote my books.  With the help of my new Patreon site, I’m going to be experimenting with new ways to promote the site and my work, so the remainder of 2018 has a chance to be really big for me.   If I ever do gain fame and fortune– and, to be honest, I’ll gladly settle for “moderately well known” and “don’t have to worry about my bills”– the work I’ve done here will be the foundation for it.

Genuinely, to everyone who has ever commented, linked, Liked, shared, forwarded, followed, anything around here:  thank you.  Thank you so very, very much.

3 thoughts on “On milestones”