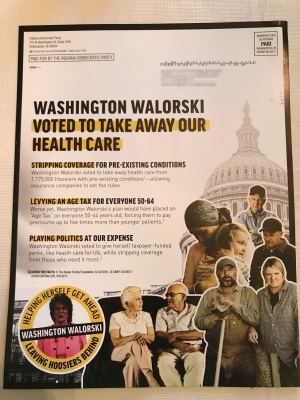 You may recall parts one and two of a series that wasn’t originally called “Fuck Mel Hall,” but to hell with it, this is my blog and I get to rename stuff if I want to, plus: fuck Mel Hall.  Mel, if you’re not aware, is one of two Republicans who is running for my district’s House seat, IN-02.  The incumbent, Jackie Walorski, is a Republican who says she is a Republican.  Mr. Hall, who received barely 40% of the vote in the primary, somehow is the Democratic nominee, but is not a Democrat.  He has made it repeatedly clear that he has no interest whatsoever in advancing the goals of the Democratic party and has never identified himself as a member of the party in any advertisement– radio, TV or print– that I have ever seen.

Now, an interesting fact about Ms. Walorski:  she only got about 3/4 of the vote in her primary, and the person she was running against literally had no campaign at all.  Not a website, did no campaigning, nothing.  But he was a dude, so 25% of the Republican primary voters voted for someone who they literally knew nothing at all about other than that he had a penis and their current representative didn’t.  Mel Hall supposedly got 40% of the vote in the Democratic primary; the other two candidates running were significantly more progressive than he was and he has continued to run as a Republican anyway.  I pay attention; there was no enthusiasm for this man anywhere during the primary and the lack of enthusiasm remains today.  He will lose and lose badly.

Anyway, take a look at that flyer up there.  My wife got one; I didn’t.  That’s unusual– neither of us ever miss an election, so generally whenever we get any election-related flyers, we get two of them.

Take a close look and see if you can figure out what’s going on here.

Also: be aware that an election cycle or two ago, faced with no significant races in the Democratic primary, my wife cast a vote for the least objectionable candidate in the Republican primary.  All you have to do in Indiana is ask for a ballot and they give you one.

This flyer, paid for by the Indiana Democratic party, appears to be trying to peel Republican voters away from Jackie Walorski, but never once mentions who they ought to vote for instead.  The entire damn flyer is Republican-framed: Democrats tend to believe government is actually good for something, so the bullshit “Washington Walorski” nonsense isn’t really going to get any traction with us.  I want my representatives to be experienced and good at their jobs, goddammit, and Walorski has been in office for six years, not thirty.  I don’t even like her and I recognize a bullshit attack when I see it.  Another tell?  Every person in the ad is white.  Democrats don’t send out ads like that.  Republicans, who know good and fucking well that their base mostly doesn’t see people of color as human beings, do.  And apparently we’re not above buying into their racist asshole framing if we think it’ll get, well, somebody some votes.

I need better fucking representation around here, across the goddamned board.

One thought on “Fuck Mel Hall, part 3 of an endless series”