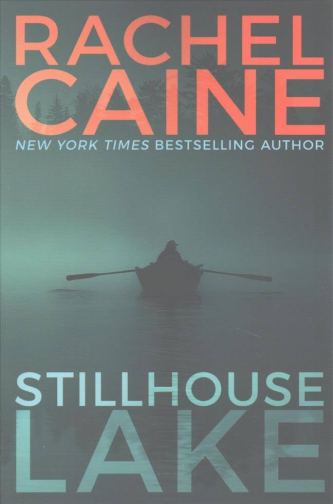 Rachel Caine is– and I hope somebody out there understands what I’m talking about here, because I feel like I might be talking out of my ass– an author that I’m a stealth fan of.  She’s one of the most prolific authors I’m aware of, up there with Seanan McGuire and Stephen King, and I have eighteen of her books.  That is a lot of books!  There are probably not many authors who I have that many books by; in fact, King is the only writer I can think of who I’m certain I have more books by than I do by Rachel Caine.

And yet I’m pretty sure I’ve not listed her previously on any list of my favorite authors, despite that, and I think Stillhouse Lake is the first of her books that I’ve been moved to review here.(*)  Her books, to me, are like candy.  This isn’t an insult!  Everybody loves eating M&Ms!  Sometimes you find yourself really craving them!  But you don’t really talk about your love of M&Ms with other people, right?  They’re just there, and they’re delicious, and there are always new M&Ms available whenever you’re ready for a new M&M.  Yummy.

(I swear.  That’s supposed to be a compliment.  I’m not very good at this.)

Here’s the thing about Stillhouse Lake, though: I feel like Rachel Caine was writing outside of her comfort zone for this book.  Her series tend (not all, but mostly) to fit squarely into the Urban Fantasy genre: first-person stories about impossibly attractive women with some sort of supernatural abilities who fight against some sort of shadowy world-dominating evil cabal of some sort.  Sometimes there are genies.  Sometimes there are zombies.  But there’s a theme.

This is the only Rachel Caine book I own that fits squarely into the modern world.  There’s nothing supernatural about it at all.  It’s also the only book of hers I’ve read that is undeniably a horror story.  (She has a series, called the Morganville Vampires, which I haven’t read and could conceivably be a horror series?  But vampires are rarely scary anymore and I suspect it’s more urban fantasy.)

So it’s quite different from her previous work that I’ve read.  And I’m about to say something about this book that I’m fairly certain I’ve rarely if ever said about a book before: it scared the hell out of me.  The premise is pretty simple: the main character was once married to, and in fact had two children with, a man who turned out to be a serial killer.  She had no idea about what kind of person she was married to until he was caught.  He was convicted and is on death row, and she was tried as an accessory to his crimes but acquitted.  Since then, she and her kids have been on the run, both from her husband’s inevitable cadre of fans and hordes of Gamergate-style internet assholes who think she got away with being a serial murderer and want to see her destroyed.  Over the years, she and the kids have gotten good about dropping everything, burning their identities and fleeing town whenever anyone seems to figure out where they are before the hate mail and the rape fantasies and the death threats can start up again.

The book starts off making the internet the enemy, and letting us inside Gwen’s head as she tries to protect her kids both from external threats and from finding out about the external threats– understandably, she wants to keep the worst of the harassment and the details of their dad’s murders from them, but without understanding just how dangerous the world around them is, the kids aren’t especially happy about constantly having to uproot themselves.  Her relationship with the kids, especially her teenage daughter Lanny, is my favorite thing about the book.

And then they find a couple of bodies in the lake they live by, bodies of young women killed in much the same way that her ex-husband killed his victims, and all fucking hell breaks loose.  And the strength of the book– Gwen’s relationship with her kids– started really working against me, as what were theoretical threats against her family and her children become terrifyingly real.  I read the last half of the book in one giant gulp last night, wanting nothing more than to go to bed but knowing for goddamn sure that I wasn’t going to put the book down until I knew everybody was safe.  The book tapped directly into my daddy-brain, and it scared the shit out of me, and when you combine that with pure expertise in page-turnery, you have a book I’m proud to recommend.  Go give it a look.

(*) EDIT: Not true, as I reviewed the last book I read by her, Ink and Bone, back in November.  And a lot of the praise I had for that book reads similarly to what I have said here– hell, the first few paragraphs of the reviews are interchangeable, basically– but Ink and Bone retains the supernatural elements of her previous work and Stillhouse Lake jettisons it entirely.  I&B is still a damn good read, mind you, but I think Stillhouse is a cut above.

One thought on “#REVIEW: STILLHOUSE LAKE, by Rachel Caine”