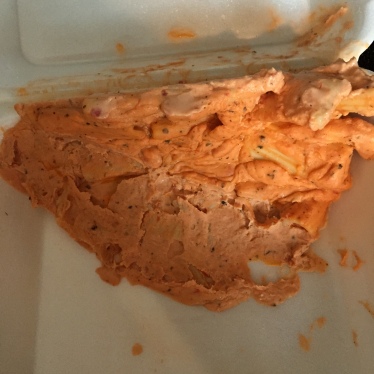 Okay, maybe I’ll gross you out immediately, because you have to look at this picture before you get any context. Bear with me.

It is possible that you may remember my blog post entitled How to Launch Your New Book: Everything I Know.  If you’ve memorized that post, or if you just clicked on it to refresh your memory, you may recall that I recommend taking the mandatory month between finishing a manuscript and rereading it for editing and redrafting and writing something else.  Now, I’m not good at taking my own advice, guys.  I’ve already broken like half the rules on that page for The Sanctum of the Sphere (preorder available now!) and I’ll likely break more before it comes out.

But!  Although I had to channel my college self, who laughed at deadlines and stayed up late when he needed to finish shit, I completed my entry for the Swords v. Cthulhu anthology last night– and, amazingly, I actually think it’s pretty damn good.  I think it’s got a solid chance of getting accepted, even if I took forever to finish it and literally didn’t send it in until 11:30 on the night before it was due when I had to be at work in the morning.

(Hah.  Do a Google Image Search for “Swords v. Cthulhu” and take a look at what comes up.)

Unfortunately, what this means is that now I have to start editing my stupid novel so that people can, like, read it and stuff, because I want that to happen for some reason.  Blargh.

We went to a local establishment for dinner last night, one I had not previously eaten at.  I like new restaurants, although I will admit that I’m starting to cool on the concept of the Italian restaurant, just because I’m pretty sure by now the pasta that I can make in my house is as good or better than the pasta that basically anywhere around here is going to charge me for. (I’ll make an exception for any place that actually makes their pasta fresh on-site, however I know of no such restaurants in town.)

But!  This place supposedly has really good vodka sauce.  I like vodka sauce!  And I’ve never made it!  So let’s check ’em out.

I am going to be charitable and assume that we were afflicted with a novice chef last night. Because while it has got to be true that there has been some point before last night that I couldn’t finish a meal at a restaurant because of how terrible I thought it tasted, I certainly can’t remember it– or it fits into some sort of special case where I was deliberately experimenting with something exotic and it turned out that I was overreaching.  Because if this shit is the best vodka sauce anyone has ever tasted, I have a frozen meal to recommend to you.  Because I am not joking when I say I would rather have Weight Watchers Mini Rigatoni with Vodka Cream Sauce for every meal for the rest of my life rather than eat the food at Polito’s again.  This shit was inedible.  I have looked at several different recipes for vodka sauce since we got home last night, and not one of them mentioned black pepper as a primary component of the dish, so the fact that this goddamn thing was swimming in black pepper has to represent some sort of error somewhere.  I’m not kidding.  I am a fat man, goddammit, and for better or worse I have been conditioned over my entire life to not leave uneaten food on my plate.  I couldn’t finish a quarter of this shit.

Which brings me to one of the other sins of Polito’s:  portion sizes so large as to somehow be offensive.  My wife and I ordered the following: an appetizer of garlic bread (which had a sliver of metal in it and still managed to be the highlight of the meal,) fettuccine alfredo and the vodka rigatoni.  The entrees came with a single breadstick and the salad bar.  Even the salad bar had a number of items that were far too large; we literally were unable to finish a single component of our meal, and my wife actually laughed at the breadsticks when they showed up.  The damn things are two inches across and nine inches long; I couldn’t tell if I was trying to eat a breadstick or blow a porn star.

The punchline: before I realized what we were in for, I had some trouble deciding what I wanted to eat, and went to the unusual step of also ordering a calzone, thinking that I’d have it for lunch the next day, mostly because I still really miss being able to eat at Pockets whenever I want and I don’t really have a good source for calzones whenever I want one.  I tried to have the calzone for lunch today, and again ate maybe 20% of it before throwing the rest away and going to McDonald’s.  Why?  Because a sausage and mozzarella calzone was, inexplicably, packed with black pepper.

If I had lived in South Bend during my dating years, I’d be seriously wondering right now if I screwed our waitress at some point and never called her back or something.  Because holy shit have I never paid money for worse food.  We left with so many to-go bags it was ridiculous; I am not the type to complain at waitresses, so I just brought the boxes home and threw them away, and I’ll never darken the place’s door again.

The final offense?  I went to the bathroom while we were waiting for the check.  The bathroom has no lock on the door and has a freestanding toilet (no walls) and two urinals that are so close together that no pair of men anywhere on earth would ever use both at the same time.  In other words, it’s not a one-seater, which would be fine; it’s just a community bathroom with absolutely no privacy allowed of any kind.  I couldn’t have taken a shit in there if I’d wanted to.

I decided to piss at Target instead.

My Tweets
Join 20,945 other followers