I keep needing to remind myself of something: I have liked every cop I’ve ever known.  The number’s not large, mind you; four, perhaps five people,  one of whom’s faces I can remember clearly but whose name has escaped me.  At least one is a Facebook friend who may read this.  Alternate universe me actually is a police officer; if you Google search my real name most of the results you’ll get are for the other guy since I’m as diligent as I can be about keeping my name off the Web.

But as much as I want to generalize, I keep having to remind myself: I know cops.  I am friends, or at least cordial acquaintances, with two of them.  They aren’t all bad people, as much as it frequently seems like they are.  They’re just embedded in a system that encourages them to be bad people, and if that’s not the most understated use of the word “just” that I see today something has gone terribly wrong.  Cops aren’t all bad people.  Cop culture fucking sucks.  You could say the same thing about gamers, by the way, a group I consider myself a part of.  The big difference, of course, is that gamers aren’t shooting young black men down in the street and getting away with it.

“The third one could be fatal if he hit me right.”

This is Darren Wilson at the hospital, no more than a few hours after he murdered Mike Brown: 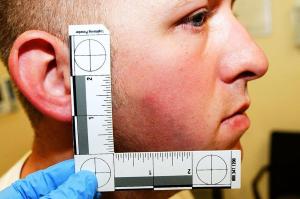 From head-on you have to look carefully to notice that his lower lip looks a little bit scraped.  The redness on his face only vaguely resembles a bruise; it looks more like a sunburn or a bad day with his razor to me.

He literally calls Michael Brown a “demon” on page 225 of the testimony, the same page where he slips and calls Brown “it” instead of “he.”  He says that holding onto Brown’s arm was “like a five-year-old hanging onto Hulk Hogan.”

Darren Wilson, according to his own testimony, is six feet four inches tall and 210 pounds. He is not a small man by any means.  What he is is a liar.  Michael Brown was murdered a hundred and fifty feet away from Darren Wilson’s car.  There are no official police photographs of the body because supposedly the photographer forgot to charge his batteries.  And Wilson’s story hinges on a call in to dispatch that, somehow, dispatch just magically never got.

This man is a liar and a murderer.  His description of the events not only fail to line up with direct evidence– the location of Brown’s body and the evidence of his own face make this perfectly clear– but his story from the beginning fails to pass the smell test in any meaningful way.  He describes a cloud of dust rising as Brown charges him (p. 226) and, astonishingly, claims that Brown was “almost bulking up to run through the shots” (p. 228), as if this young black man was literally the Hulk or some sort of inhuman monster.

He also describes Brown as charging him with one hand in his pants.  He’s wanting to make us believe that he thought Brown had a gun; I’m too busy trying to picture the image of a person bent over and charging headfirst toward someone with one hand down his pants to even consider the possibility.  It’s so ridiculous that I can’t even talk about it in a straightforward manner.  The image is comical.

The grand jury, remember, didn’t have to convict this person.  That wasn’t their job.  Their job was to decide whether it was reasonable to take him to trial.  Let that float through your head for a moment.  This man killed an unarmed teenager in the streets, claimed that he was being beaten to death and yet has marks on him less severe than my toddler has inflicted on me, claimed that, at 6’4″ and 210 pounds he was “like a five-year-old” next to an eighteen-year-old kid barely an inch taller than him… and the grand jury didn’t think there needed to be a trial.

Incidentally:  he repeatedly insists that Michael Brown hit him with his right hand while he was punching him through the car window.

Darren Wilson was in the driver’s seat of his police car.

Brown was hitting him with his right hand, beating him nearly to death, according to Wilson’s testimony.

And the bruises and marks are on the right side of Wilson’s face.

Think about that for a moment.

The sickness in this country is very nearly too much to bear.

A story, if you don’t mind.  Two, actually.  Oddly, both take place on the same highway.

I am driving in the left lane on 465 south, the Indianapolis bypass.  It is late at night, and I am (admittedly) speeding.  I pull alongside a vehicle on my right side, who is more or less matching my speed.  I glance in my rear-view mirror to see a vehicle in the distance behind me, a vehicle that goes from “in the distance” to “ten feet off my bumper” in a matter of seconds.

The car to my right is still not changing speed; the one behind me is very clearly in a huge hurry.  So I accelerate to get out of his way.  And the very second I hit 81 miles per hour– I did admit I was already speeding, but hitting 81 put me in a different bracket for my ticket– the unmarked cop car behind me hits the lights and pulls me over.

I was livid.  If he’d pulled me over for the speed I was already driving at, I’d not have been so angry.  I’d just have been busted.  But I was literally only driving the speed he pulled me over for because he’d come out of nowhere and he was tailgating me.  For all I knew, he was drunk– again, it was dark and an unmarked car; all I could see behind me were headlights.

I’m not going to pretend that I remember the precise conversation, but I was not polite with the cop.

A second story, on the same highway: It’s nighttime this time too, I’m coming home from my college graduation party, and in fact am still wearing my graduation gown.  This time, I just get popped for 75 in a 65 at a speed trap.  (I feel compelled to point out here that I haven’t gotten a ticket of any kind in seven years.  Just FYI.)  It’s fair, and I’m not angry about it.  Unfortunately, I can’t find my proof of insurance, or my registration, or something.  I know it’s somewhere in the car, but it’s not in an envelope or anything and I can’t track it down.  The cop tells me he’ll give me a minute to find it and goes back to his car to do whatever cops do for fifteen minutes when they pull you over.

I find my documents and, not thinking anything of it, get out of my car, my graduation gown still flapping in the wind, and walk back to his car to give him my papers.

He, absorbed in whatever he’s doing, doesn’t see me coming– doesn’t even realize I’m there until I tap on his window, startling him.

15 thoughts on “And none could say they were surprised: on #Ferguson”