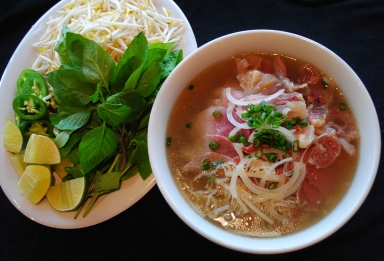 At some point earlier this week, the tasty Vietnamese dish known as pho popped onto my radar in three or four different places on the same day.  I’d never had it, and for some reason I was seeing lavish paeans to the stuff everywhere I looked all the sudden.

As I’ve mentioned a couple times, I’m trying rather aggressively to increase my exposure to different kinds of food.  I decided one way or another I was going to find an excuse to eat me some pho.  While I was bored at work today I put up a post on Facebook looking for anybody who lived near me who could either recommend a recipe or knew a place that served it.  I learned a couple of things about pho in the process:

As I was leaving work, I called my wife, who was already not planning on seeing me for dinner just because of how late I was working.  I was planning on buying some pho to go (which would be pleasingly rhymey if pho was pronounced the way it looks like it should) but it turned out that she wanted me to run an errand on the way home so it made more sense to eat there.

This caused me a tiny bit of trepidation.  I was single and unable to cook for a long time, so it wasn’t like I wasn’t comfortable with eating alone in restaurants.  But I’d never been inside this place before and that caused me a touch of trepidation, since I wasn’t sure how “sit-downey” the place was.

I arrived at Bowl of Pho to discover that the businesses to either side of it were called Scrub Depot and– no shit– Boxes Plus.  I posted to Facebook to that effect, causing no end of hilarity for the guy who already thought I lived in Literal Town.

So, interesting thing about Bowl of Pho:  one of the long walls in the place is entirely mirrored, which causes a little bit of disorientation when you walk in if you’ve never been there before, so there’s a moment when you stand there like an idiot while you figure out where the walls are and then you notice the sign that says to seat yourself and you sit down.  There was a table right by the door, and I snagged it, briefly considering moving deeper into the place to a smaller table.  I had my back to the door.  This proved to be a mistake, as I was greeted by a cold blast of air every time someone came in, and I’m also not good about having my back to doors in restaurants.  Everyone else there looked like they were on a date, which kind of intensified the Creepy Single Guy effect.  Pleasingly, fully half the clientele were Asian– and this is not a town with a high Asian population– which made me figure they were probably doing the food right.

Over the next five minutes, a guy brought me some water and the waitress came by.  She and I had a brief conversation where I told her that I’d decided to eat pho and that Facebook had told me to come to them, and that she should just bring me whatever the most “typical” version of pho the Bowl of Pho had to offer.  And water?  Sure, yeah, water.

During that five minutes every empty table in the restaurant filled up.  And most to capacity.  I was at a table for four– not a huge table for four, mind you, but a table for four.    This further intensified the Creepy Single Guy effect.  I’d have moved, but the other tables for two filled up right away.  And I was, again, right by the door, which gave me this weird feeling as people came in and saw me sitting by myself that they were resenting me for taking their table.

So, yeah, pho:  what she brought me looked exactly like what’s in the picture up there; I wasn’t about to get even weirder by whipping out my phone and photographing my food.  The only problem?  The bowl was roughly three times as big as I was expecting it to be.  Holy shit did they bring me a lot of soup.

I put a few of the leaves (I still don’t know what they were) into the soup and most of the noodles and the jalapeños (?) and squeezed some of the limes and put a healthy few squeezes of sriracha in as well.  And dug in.

Guys, pho is fucking delicious.  Neat thing about it: the beef is put in raw, and then the broth poured over it, and because it’s cut so thinly the broth actually cooks the meat basically right in front of you.  It was wonderful.  And not to repeat myself or anything but the bowl was so big that I spent two or three minutes eating before discovering the huge pile of rice noodles underneath all the broth; I’d wrongly assumed that the stuff on the plate was all the noodleage I was going to get.  Nay-nay.  There’s so much more.

Something else pho is?  Spicy.  Especially when you pour sriracha all over it before you start eating.  I figured out quickly that I was going to be in some trouble here; as I said, the place went from half-empty to packed in less time than it took to talk about it, so the one waitress was waitressing her ass off at high speed and didn’t look terribly amenable to being flagged down to bring me more water.

Man up, bitch.  I kept eating, rationing my water, trying not to embarrass myself too much, and kind of glad I wasn’t facing the door so that no one coming in could see my nose running from the heat.   Then I heard the Asian couple at the table next to me explaining to the white couple that they’d come in with what Thai iced tea was and how they should try some.  (Their races are relevant, as I was basically eavesdropping on their conversation through the entire meal and it was very clearly a case of Introducing Old White People To Our Culture.)

Eventually the waitress came by with water and saved me from running to the bathroom and burying my face in the toilet tank.  I asked her if she could bring me some Thai iced tea.  She did.

I took one sip.  Involuntarily, my eyes fluttered.  I almost passed out.  Bowl of Pho should be called Glass of Thai Iced Tea.  I fucking love Thai iced tea.  This might be the best glass of it I’d ever had.

She dropped off the check with my tea, a subtle hint that perhaps I should hurry; one I didn’t mind, as, again, they’d brought me roughly twelve times as much food as I’d expected.  I ate all the meat and nearly all of my noodles and there was still enough broth in the bowl that had that been the entire ration they’d brought me I would not have been surprised.

The bill was just under $13, which made me feel a bit better about the size of the bowl; if you’re gonna charge me nine bucks for soup there had better be an enormous amount of it.  That said, I left a $20 and didn’t bother waiting for change.  Like I said, the waitress was running her ass off and the soup and especially the tea were that good.

I got into my car and texted my wife, letting her know that I was planning on leaving her for whoever had made the tea, just as soon as I found out who that person was.  If that person turns out to be a man I’m gonna have to get gay marriage legalized in Indiana.

8 thoughts on “In which I have soup: a blog post”