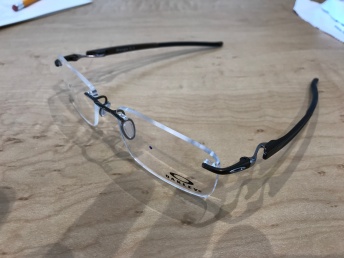 I realized a couple of weeks ago that I was out of date for a new prescription for my glasses, both in the strict calendrical sense and in the fact that I can tell my current glasses aren’t quite cutting it any longer.  I’ve been weird about eye doctors since moving back to my hometown; the guy who took over for my original (birth to age 26 or so) eye doctor after he passed away was a bit of a brusque ass; the dude after him was fine personally but his office sucked, and a new optometry practice just opened up a couple of miles away from my house.  So time for a new eye doctor for this visit, and time for a new face, too.  I wanted, in the abstract, a new look, something radically different from the style of my last several pairs of virtually-identical frames.

So here is a thing about me that I hadn’t realized:  despite the fact that I’ve had glasses on my face for damn near every single day since second grade (there were a couple of detours into contact lenses that didn’t stick) I apparently don’t actually want to see glasses when I look at my face.  My preferred style for years now has been to have no frames on the lower part of the lenses, and I found myself quickly gravitating toward “screw-mount,” or frameless, glasses.  The pair I ended up with is in that picture up there; on my face, they’re nearly invisible.

And I discovered two other things about myself, one of which kind of alarms me and both of which deserve a bit more personal interrogation:  1) it turns out that I don’t actually have any idea how to distinguish “frames for women” from “frames for men,” beyond obvious considerations of the size of the damn things, and 2) my first thought, upon putting anything more substantial than the frameless or half-frame look on my face, was almost always “Man, these look really gay.”

To be clear, we’re talking about frames like this:

Okay, this whole post just fell apart, because in my attempt just now to find a “not gay” pair of men’s glasses, I initially grabbed a picture of Zachary fucking Quinto, who is actually gay.

Anyway, point is, under on-someone-else’s-face circumstances, I don’t think these glasses look gay:

Nor these, and yes, I did deliberately look for a picture of Clark Kent:

..which, goddamn, are those the same glasses?  Has Zachary Quinto played Superman?  Maybe he should.  The point is it is exceedingly rare for me to look another man’s glasses and think that his glasses make him look gay.

But if you take those same glasses and put them on my face, all the sudden what I see is this:

(That’s Leo, from season six of Worst Cooks in America, and probably a bunch of other places but that’s where I first encountered him.  He’s hilarious.  And he can rock whatever look he wants.  I cannot.)

Anyway, point is, that’s weird, right?  I am, under normal circumstances, sufficiently secure in my sexuality, or at least I thought I was, and while my wife will probably be able to come up with a counterexample, I can’t really come up with any other times where I’ve rejected an entire genre of apparel because it “made me look gay.”  But, shit, that was the reaction to every single pair where the frames were actually visible, and it was immediate.  Like, what the hell, brain?  Where did that little bit of internalized homophobia come from, and how do we beat the shit out of it?

I probably ought to just buy the thickest pair of brightly colored glasses I can find and make myself wear them until I don’t give a shit anymore.

5 thoughts on “On my new face and my stupid brain”