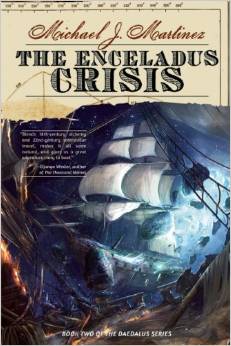 I read the first book in what is now called The Daedalus Series last year.  I liked it well enough, but The Daedalus Incident spent the first third messing with my head and I never quite recovered from having to force my way through the first part of the book.

Here’s the thing about me and fictional narratives: for better or for worse, and maybe this makes me some sort of idiot, but I like my narratives straightforward. I don’t like it when authors deliberately confuse me.  And The Daedalus Incident, which jumps between two separate dimensions, one a fairly hard-core science fictional future universe set in the 2100s and one a fricking alchemically-based alternate past set in the eighteenth century only there’s already life on all the planets in the solar system and aliens on Saturn and by the way they’re sailing in between the planets using galleons with sails, is kinda designed to mess with your head.  And by the end of the book the two universes bash themselves into each other in interesting ways and there’s an ancient Martian warlord involved (because Mars has had intelligent life on it in the distant past, right?) and all sorts of hell breaks merrily loose.

I liked it.  It didn’t stick in my head terribly well, but I liked it.  It is possible that had the second book not been called The Enceladus Crisis, I might not have picked it up.  Enceladus, after all, is my favorite moon.

(There is life on Enceladus. You wait.)

Holy crap am I glad he didn’t set this on one of the boring moons.  Here’s how good The Enceladus Crisis is: it makes me feel like I need to go back and reread The Daedalus Incident now that I don’t have the immense problems with what the hell is going on here that I had the first time I read it.  It took a while to get through Daedalus because the first part was such a slog (and, again, that’s a personal reaction: if you can deal with the what the hell without aggravation, you won’t be slogging).

I started The Enceladus Crisis yesterday and finished it this afternoon.  That good.

The Enceladus Crisis contains Napoleon, ancient Martian warrior gods, alchemical galleons, Star Wars and Firefly references in the 22nd century, ancient Egypt, the Rosetta Stone, interplanetary exploration, zombies, and a handful of sequences that feel straight out of an Indiana Jones movie.  It is awesome.  It is action-packed and exciting and creative and fresh and original (no, seriously, space galleons powered by alchemy) and unlike the first one he’s clearly got a contract for another book now so it ends by nicely setting up the next book without feeling like it was written as the middle book of a trilogy.  In fact, I’d say you don’t have to have read Daedalus to enjoy Enceladus; I read it nearly a year ago and I’ve literally read a hundred fifty or so books since then, so my recollection of finer details is not great.

Two thumbs up.  Go check it out.