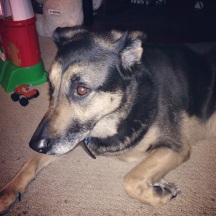 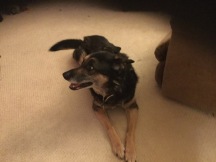 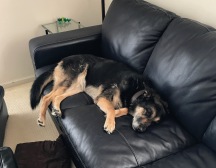 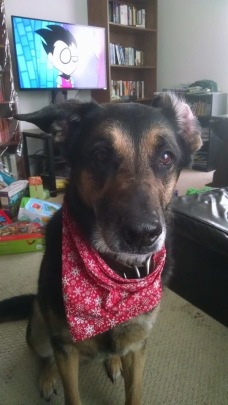 For reasons that aren’t really clear to me– I live my life online, and I write about goddamned everything— I don’t tend to write about it when my pets pass on.  When my wife and I got married in 2008, she had a cat and two dogs and I had two cats– our five pets were actually against county ordinances for the first several years we were married, until one of my cats died and we were down to a legal two cats and two dogs.  My author description on most of my books describes me as living with “an assortment of pets.”  Since I started this blog, we’ve lost Hector, one of our dogs, and Kashmir, one of our cats, who I know I wrote about a couple of times.  I did not mark either of their deaths with a post, and I don’t know why.

We had to let Snarf go this morning.  My cat (she is twenty years old, has lived with my wife for half of her life, and is still manifestly my cat) is now our only pet.  Snarf was nearly fifteen years old, a ripe old age for any dog but particularly so for a German Shepherd, a larger breed that most of the time doesn’t make it past twelve or thirteen.  She’d been on a slow decline for at least a couple of years now; I’d had a conversation with my mother as recently as last weekend about how much longer we were going to let things go.  If you know German Shepherds, you know they tend to have issues with their hips, and over the last couple of years it had been getting harder and harder for her to move around.  In addition, she’d gone stone cold deaf.  But she was still her, and like I told my mom when she asked, how do you get up in the morning and decide okay, today’s the day I kill my dog?  Today, and not tomorrow?  How the hell do you decide that, until it’s already past the time when you should have decided?

I dropped my son off at day care yesterday morning and spent most of the rest of the day in front of my PS4.  Around noon I realized that Snarf wasn’t in the room with me.  If I was home, Snarf was always in the same room with me, to the point where lately I’d been trying not to move around all that often because she’d force herself up and follow me around, even if I was just going to the bathroom or getting something from another room.

And I’d been home for three hours, and I hadn’t seen her yet. I actually thought right then that I was about to find my dog dead on the floor in my bedroom.  But no; she was alive, just a few steps slower than she’d been even the night before.  I don’t know what changed, but overnight she’d gotten worse.  Much worse.  She stayed in the bedroom almost all day.

That’s how you know, I guess.

Our vet has been taking care of Snarf since she was a puppy– she’s actually known the dog for longer than I have– and she was nice enough to come in on her day off to take care of us.  And for the third time, I had to explain to my son that one of his pets was going to die– only this time, it was a complete surprise.  Kenny knew that she was getting old, of course, but she wasn’t sick in a way that a nearly-seven-year-old was going to really notice.  As far as he can remember, she’s never not been an older dog, and it was even harder than usual to explain why what was about to happen had to happen.

I’ve had, depending on how you count, somewhere between four and seven dogs that I could have called my dog, and two that I was actually personally responsible for.  Snarf was probably the smartest dog I ever had, and she was absolutely the best-trained of all of them.  She was loyal and friendly and scary as hell when she wanted to be and she was happy and she had fourteen good years with us and some months that maybe weren’t so good.

And as I’m writing this, the doorbell rings, and it’s not greeted with a chorus of dog barks, and that’s the moment when I lose it and start crying again.  I’m not answering the door.  Whoever is out there should have called first.  There’s supposed to be a dog there, telling them to stay away, until the moment I let them in the house, when they became safe and a friend.