Oh, Dino Squad.  How much do I hate thee?   I hate thee a whole damn lot.  In general, I am very much pro-dinosaur and pro-dinosaur programming, but this show is edging closer and closer to the “Oh, sorry, Netflix is broken” level of I can’t watch this shit anymore right now.  It’s getting the kid interested in dinosaurs, and he’s learning a few things, but it’s making me insane, and it’s all about me and we can’t have that.

We will start with the theme song:

You didn’t click that, so here are the lyrics:

I understand that complaining about suspension of disbelief and scientific inaccuracy in a kids’ show is a mug’s game.  I’m a superhero guy.  There are expensive superhero statues in the room with me and action figures on my desk.  My disbelief is suspended from the firmament itself most of the time, but this show still breaks the hell out of it.  So let me just lay this show out for you, and you tell me exactly when it gets to be too much.  Here is what Dino Squad is about:

So, all right, still okay.

But that’s Science Luther talking.  Shut up, Science Luther!  It’s a kid’s show!  Okay. Like I said, eventually that line gets crossed.  Maybe this is what does it:

Has the suspension of disbelief gotten harder yet?  Still need more?  Okay.  Here’s the kicker, then.  This is Victor Veloci’s hair:

And, lest you think “Oh, he’s just long-haired, what’s the big deal?” let me show you another picture of Victor Veloci: 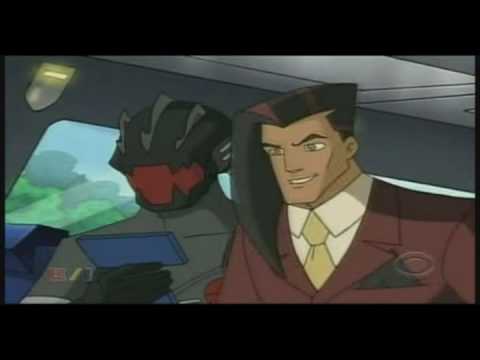 No, he only has long hair on one side.  And that is an honest-to-God red streak dyed into his hair.  His haircut, somehow, is the most ridiculous thing about the show.

Note also his minions, who are dressed like COBRA applicants who got rejected for dressing too ridiculously.

So, yeah.  The show is about how this 75-million year old supervillain is routinely outwitted by a bunch of teenagers who can turn into dinosaurs.  Note that Veloci himself can regain his velociraptor form at any time.  (So can the old lady, presumably, although I don’t know if I’ve seen an episode where she does.)

And those teenagers?  They’re… weird.  Especially this one: 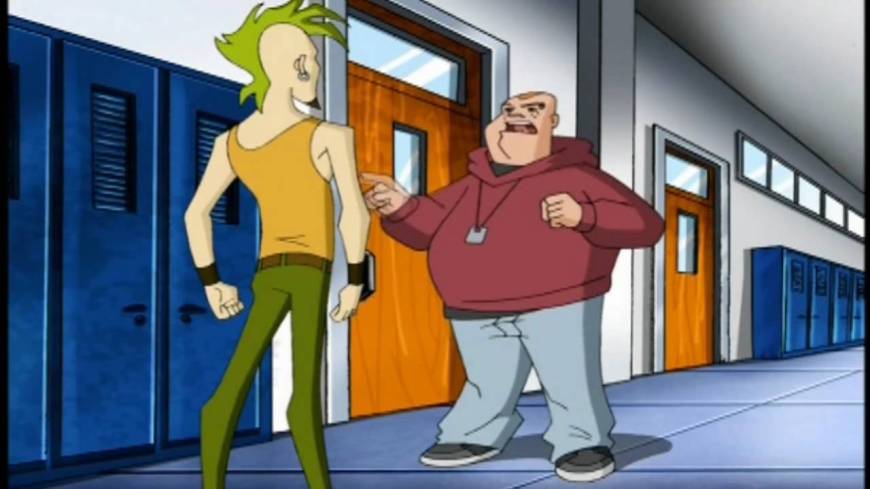 Now, again, these kids are in late high school, because they’re driving, but this one particularly– he turns into a pteranodon– keeps getting storylines that imply he is nine.  This particular image is from an episode where he’s having problems with bullies.  The bully’s name is McFinn, which is somehow much more ridiculous than it should be; it sounds really dumb anytime anyone says “McFinn” on the show, especially when they imply that this “McFinn” person is scary or tough.  He’s just not.  Plus, dude, you’re a dinosaur.  Drop him off a cliff.  There’s one right there by that lighthouse y’all are based in for some reason.

Now, I know, high school kids do have problems with bullies, and I’m not trying to minimize that.  But the way they handle it is weirdly infantilizing, especially since they really do try to treat pteranodude like he’s a lot younger than the rest of them.  He also gets an episode where Victor Veloci pretends to be a pretty girl in an MMORPG (75 million years old, people) and tries to get him to “break Internet safety rules” and tell her where he is so that Veloci can… do… something.  I dunno.  Underpants gnomes, profit.  The high school students have technology sophisticated enough to detect two mutated dinosaurs three states over and this dude is trynna catfish over Xbox Live.  I don’t get it.  And mohawk dude is the only one who gets these storylines.

(Oh, and remember that “play after school” line from the theme song?  Is that what high school kids do after school?  They play?)

Here’s the transformation video.  It plays six times an episode.  If your kid watches this show, expect him to spend a lot of time yelling “65 million years back!” and “going into dino mode” when you need him to put on his shoes:

One (1) point is awarded to the show because the big black kid, who would be a football player on any other program, is actually the computer nerd.  Other than that, I hate this show.