Let’s start this with a careful look at the cover of The Venusian Gambit: 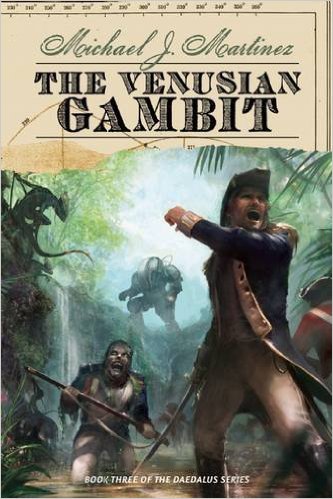 The following are all present:

You already know whether you need to read this book.  There is no point to discussing the plot.  That cover tells you everything you need to know and you should absolutely judge this book by its cover.

The Venusian Gambit is book three of the Daedalus series, following The Daedalus Incident and The Enceladus Crisis.  I did not review The Daedalus Incident, but I loved the hell out of Enceladus.  Gambit concludes the series, in a rather final way, although I’d love to see future books set in either of the universes established in this series.  Honestly, if you read the review of Enceladus you already know what I’m going to write here, with the caveat that this book officially makes Martinez my favorite adventure writer currently working.  Yes, adventure; the series has science-fictional trappings, of course, especially since half of each book is set in the 2300s, but these, to me, are old-school adventure stories, and I think they owe more to Tarzan or, especially, Indiana Jones than to, say, Philip K. Dick.

You will read this series if you like fun.  A brief digression: The Flash is either my favorite or second-favorite show on TV right now depending on whether the last episode of The Walking Dead aggravated me or not.  Why?  Because it is immediately and constantly apparent that each and every actor on screen is enjoying the hell out of themselves while they’re at work.  The Daedalus books have that same feel to them; Gambit is stuffed with enough fun for any four normal books of similar length, and I have the feeling that Martinez was cackling to himself as he devised some of the things that happen to his characters at the end of the book.

(Also, on a personal note, I love that Gambit and The Sanctum of the Sphere both have their big climactic scenes set underneath giant pyramids, and… well, you’re going to have to wait for Starlight to come out to see the similarity to that book that entertained me.)

I finished the book today.  I don’t always read afterwords to books, but for some reason this one kept me going, and about a third of the way through it, I thought to myself Man, it would be neat to see my name in one of these someday.  I swear to God that is exactly and truly what happened.

And then this happened: 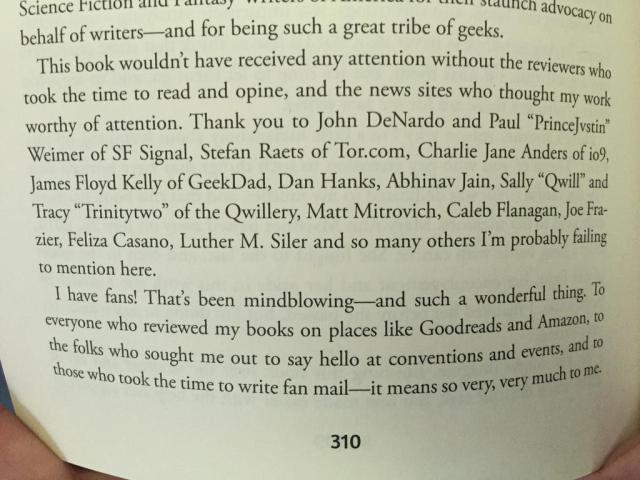 So… I need a disclaimer now, I guess?  This book was totally getting a rave review before I found my name in it.  And now I need to stalk Michael J. Martinez and find him at a convention somewhere so I can get this thing signed.