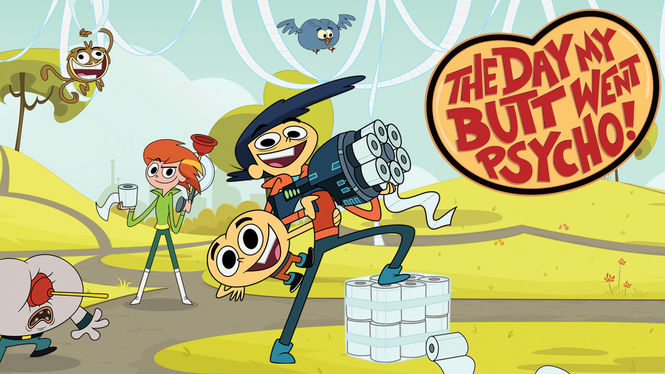 So the boy has figured out how to use the Netflix app on his (my) iPad, meaning that he no longer really watches “TV” in the classic sense, ie, on an actual television.  He’s also become a bit less likely to get religion about a show for weeks at a time.  The New Hotness might last only a few days now before he moves onto something else.  Also, because he’s watching on a personal device, what he’s watching requires a bit more direct monitoring than the TV, which gets shoved into my brain if I’m in the room whether I want to or not.

A couple of weeks ago I’m sitting in my recliner, probably reading or something, and he’s on the couch watching some damn thing on the iPad.  After a few minutes, I realize that the word butt has floated into my earballs just a bit more than random chance might otherwise suggest, and I start paying attention.   And the word butt continues to fly from the iPad.

“Boy, what the hell are you watching?”

“The Day my Butt went Psycho,” he says.

This confuses him.  At any rate, he’s telling the truth, and The Day My Butt Went Psycho is an actual fucking show, made by Canadians and Australians, no less, two peoples who I thought had more sense than this, and based on an actual book.  Although it doesn’t appear to be actually about a particular day, or anyone’s particular butt going psycho.  No, this show’s actually the weirdest post-apocalyptic fantasy in television history:

Butts!  Always one step behind.  Years ago, butts rose up to overthrow humanity.  People fought back!  And now an uneasy peace remains, as the world waits for the next great buttfighter!

Here, there, everywhere,
Butts are loose but we don’t care
I’m teaming up with my butt
Cheek for cheek, an awesome pair
We’ve got the same DNA
Kicking butt in every waaaaay
Zach and Deuce forever!

I have so many questions.  How many years ago did this happen?  Decades?  Just a couple of years?  Has Zach’s butt Deuce always been detatched, or as the show implies, did it happen when he was a teenager?  Are children born with their butts detatched?  Can butts reproduce on their own without human assistance?  Do butts automatically match their humans in gender?  How the hell does pooping and digestion in general work now? Do butts need to eat?

What the merry fuck is buttfighting?  Why is the world waiting for a buttfighter, and how will a buttfighter help with the “uneasy peace” between people and butts?  Zach and Deuce are best friends; are they unusual in this respect?  Do most people not get along with their butts?  How does that work?  What happens to the people whose butts were killed during the Great Butt Uprising?  What happens to the butts whose people were killed during the Great Butt Uprising?  Have animals also lost their butts?  What about other living things who possess a digestive system and a means of excretion but do not, precisely speaking, have what we would call a “butt”?

What exactly is a butt, anyway?

I need to know the answers to these questions.  But without, like, watching the show or anything, because I just cannot handle this number of butt-related puns, with episodes like Butt I’m a Cheerleader and Jurassic Fart and Game of Porcelain Thrones and My God Just Kill Me and maybe I made up that last one.

This show is not telling the stories I want to hear.  I need worldbuilding here, people!  Exposition!  When are the prequels coming out?  I must know about the uprising.

God help us all. 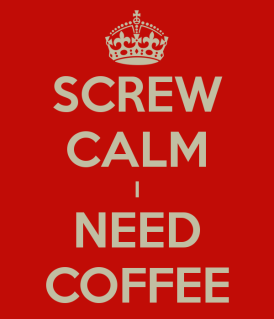 I stopped at McDonald’s for coffee on the way home from work today, if that tells you anything about my day.

You may recall this post about my issues with the bathrooms at my current place of business.  If not, I recommend reading it; it’s funny, in a terrible godawful why did you tell us that sort of way.  If not, allow me to quote myself, if I may:

There are two adult bathrooms at my new place of business.  One of them is a one-seater and is effectively a private men’s room for the office.  That bathroom has two problems:  1) it is directly outside the principal’s office and 2) I am one of only three men who might ever use it, and one of the other two is frequently not in the office, so not only is there a theoretical chance that my boss might hear me in there but if I power bomb the place everyone is going to know it was me.  This cannot stand.

It is my prep period.  I am in my office frantically trying to get some of my own job done before I have to go do someone else’s for a while.  I have, as it happens, already had a cup of coffee this morning.  Now, for most people, coffee is a diuretic.  For me, it has rather more… substantial effects, if you know what I mean and I hope you do.

Coffee makes me shit, is what I’m trying to say here.

So, yeah.  As it works out, both of the other men in the office are not currently in the office, meaning that I can basically do whatever I want in My Other Office with no worries.  I become aware of Impending Pressure and head off to do my business.

Meanwhile: the assistant principal is next door.  We have recently had a very serious bullying issue on one of our buses that she’s been straightening out, and she’s been using varying levels of severity depending on the level of insistence of the various children involved that they had nothing to do with it.  As it turns out, there is video.  Fairly a lot of video.  So each and every one of these lil’ motherfuckers is busted; it’s just a matter of how long they’re gonna lie before a hammer gets dropped on their heads.  The kid currently in her office is being very insistent that he’s done nothing and said nothing and at the moment the AP is simply sitting there calmly categorizing his lies for use later.

This will, as it turns out, not go well for him.

So, back to me: I’m doing my business.  I’m doing quite a lot of my business, as it turns out, and it occurs to me partway through that I ought to be really glad that there’s no chance anybody else is gonna be trying to get in here anytime soon.

I finish.  I wash my hands.

Thank God I washed my hands.

Because when I open the door, my assistant principal is standing immediately outside the bathroom, with the student, who has clearly spent my entire time in there bawling his eyes out.  I do not know how long they have been waiting.

“Go on in there and clean yourself up,” she says to him.

I have two choices at this point.  This bathroom ain’t fit for human habitation, and there is  no escaping the fact that I am the one who has ruined it.  I can either admit it and suggest that the boy use the ladies’ bathroom (which, much like ours, is a locking one-seater) or I can just shrug and let this boy enter into the bowels (see what I did there?) of Hell, where the sulfur in the air will surely blind him before he’s able to wash the tears from his face.

Instead of doing either of those things, I just died of shame on the spot.  This will be my final post; it is being typed by my spirit, which will remain bound to that bathroom for all eternity once I hit “Publish” on this post. 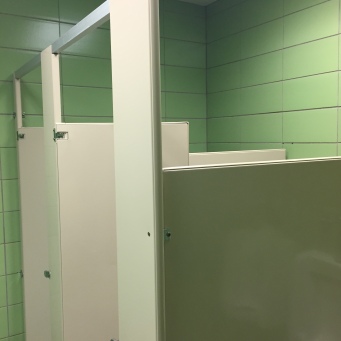 I would like to complain about an aspect of my job, if you don’t mind.

I have certain issues with public bathrooms.  For example, I do not understand how anyone can talk to anyone else while… uh… performing in a stall.  It is literally the creepiest thing ever when people try to talk to me when I’m in a stall– particularly if they begin the conversation by making it clear that they don’t actually know who it is in there.  This is the one way in which I will declare as a broad statement that I don’t understand women; my understanding is that it’s a social hall in there and y’all go to the bathroom in packs.  Sometimes there are couches in your bathrooms?  Is this true?  I don’t get it.  It’s weird and y’all should stop being weird.

My dislike of communication in the bathroom extends to basically creating any sounds of any kind, honestly.  My preferred pooing atmosphere, if you will, is in a completely empty (other than the stall, which should be lockable even though there’s only one) and entirely soundproofed room.  I don’t mind people theoretically being able to hear me pee, but damn if my nethers don’t clamp up involuntarily upon someone else entering the bathroom.  I have to force myself to continue taking care of business if I know someone else is in there, even if that person is in another stall and actively making the noises that I’m trying not to make.

There are two adult bathrooms at my new place of business.  One of them is a one-seater and is effectively a private men’s room for the office.  That bathroom has two problems:  1) it is directly outside the principal’s office and 2) I am one of only three men who might ever use it, and one of the other two is frequently not in the office, so not only is there a theoretical chance that my boss might hear me in there but if I power bomb the place everyone is going to know it was me.  This cannot stand.

Allow me to continue.  The picture attached to this post is of the two stalls in the other staff men’s room in my building.  Take a look at it for a moment and see if you can see the problem.

I am five feet ten inches tall.  That puts me at just about exactly the average height for a white American male my age.  When I am standing up, which I will be doing when, uh, completing the process of the… uh… process, my entire head is above that partition.  And if there happens to be another man in the stall next to me, and that man finishes at the same time I do, we can look at each other and make eye contact.

There is nothing more horrifying in the entire universe, except for the possibility of an exceptionally tall person (they’d need about six to eight inches on me, I estimate) walking into that stall, because that person would be tall enough to see me just by looking down.  And that would cause horror enough to kill me on the spot and force me to haunt the bathroom for the rest of eternity.

There is nowhere safe to poo in this building.  I need to either massively adjust my diet or get a new job.