My reviews of the last couple of Star Wars movies have been a million words long, but I don’t think Solo is going to need that treatment.  I’ve done spoiler reviews and non-spoiler reviews for them, and I think this is probably the only review Solo is going to get. Since it’s going to be shortish, I’m gonna go ahead and review Deadpool 2 here as well, but I can’t review that one without spoiling something big.  So we’ll do Solo first.

And the tl;dr review is this:  it’s good enough.

It was going to be hard under any circumstances for Solo to blow me away.  I never really felt the film was necessary, and unlike Rogue One, which I also didn’t think was necessary, the trailers and such never really grabbed me and forced me to be excited about it.  It is better than any of the prequels and it is better than The Force Awakens, a movie that I was jazzed about initially and has done nothing but sink in my estimation since then.  Is that damning with faint praise?  Possibly.

The million-dollar question about this movie was always this:  is Alden Ehrenreich good enough to fill Harrison Ford’s shoes?  Can he convincingly play this character?  And the answer, to me, is an unqualified yes.  I had no problems with Ehrenreich’s performance at all– in fact, I think his portrayal of Han in this movie was leaps and bounds ahead of Harrison Ford’s portrayal of Han in Force Awakens.

In general, the acting in this film is quite solid across the board, and if anything (okay, minor spoiler incoming) the only gripe I have about the film is that I wanted to know more about just about every character who they decided to kill off.  I thought basically every character that had more than a couple of lines was really interesting, but some of them unfortunately we aren’t going to see again.  There’s one major surprise and one “subverting expectations” sort of surprise toward the end of the film, and in a movie where you basically know everything that’s going to happen going in, actual surprises have more impact than they might otherwise.

Yes, Donald Glover is spectacular as Lando Calrissian.  Scary good, honestly– his first few lines are delivered with him offscreen, and I seriously thought they’d brought in Billy Dee Williams to overdub him.  He’s doing a voice thing, and it’s perfect.  I didn’t think he ran away with the movie the way a lot of people seem to, but he does a very very good job.

So.  Yeah.  Not an essential addition to the canon, but a solid effort, especially given what a trainwreck the movie was expected to be before it came out.  I will allow them to do a second one if they must.  Especially if it delays the newly-rumored Boba Fett movie.  Please, please don’t make a Boba Fett movie.

I’m so tired of Boba Fett. 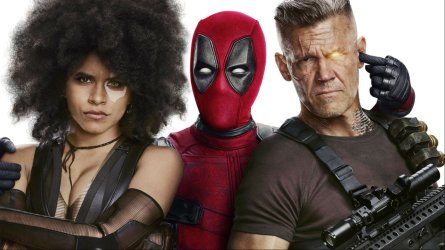 And now, on to Deadpool 2.  This one will spoil a major event that none of the pre-movie stuff even hinted at, and although it happens damn near immediately once the movie starts, you probably don’t want to know about it.  Last chance to bow out!

I’ll start off with the good stuff, actually: you are probably going to have more or less exactly the same reaction to Deadpool 2 that you had to Deadpool, and if you haven’t seen Deadpool you may as well go see that instead because it’s a better movie.  It is, in most ways, exactly the same film, only with a slightly expanded cast and budget and much more entertaining cameos and the one thing that really pissed me off that I’ll get to in a minute.  Josh Brolin is pretty good as Cable, a character I’ve never really had much interest in, and the Juggernaut is my favorite X-Men villain so it was great to see him, especially after the godawful portrayal Vinnie Jones did in X-Men 3.

I want Domino to get her own movie.  Now, please.  And if we could get a movie with Negasonic and her girlfriend, maybe with Colossus around, that’d be just peachy.  Because I love all of them.

That said, killing off Vanessa right away pissed me off, and even though they undo it at the end of the movie I can’t unwatch the two hours I spent being pissed off that they killed her for no fucking reason at all.  Think about it: imagine the movie without Vanessa dying right away.  Damn near nothing changes.  You lose a few scenes of Deadpool kvetching about it and maybe they have to do a little bit of a rewrite of his motivations for wanting to save the kid?  But that’s it.  Her death is pointless, and undoing it at the end doesn’t help.  I’m tired of movies and books and whatevers that motivate the main character by killing off their girlfriends and/or wives right away, and it threw a pall over the entire rest of the movie for me.

So, yeah: it’s a Deadpool movie, and that’s a good thing, and the cast and the couple of new characters they added are fun and interesting, but fuck you for killing off the female lead ten minutes into the movie.  I can’t forgive that, as it turns out.

I’m up to four patrons!  Which is better than I thought I’d do, honestly!  But more would be super awesome.  Join the club of the coolest people in the world.  You’ll get a new Jayashree story right off the bat, and I’ll be adding at least one more microfiction by the end of the weekend!  Plus all of my Patrons get thanked by name in any forthcoming books.  You want your name in books, right?