We hadn’t stopped working; I just decided a few days ago that I wasn’t doing any more updates until shit looked good. 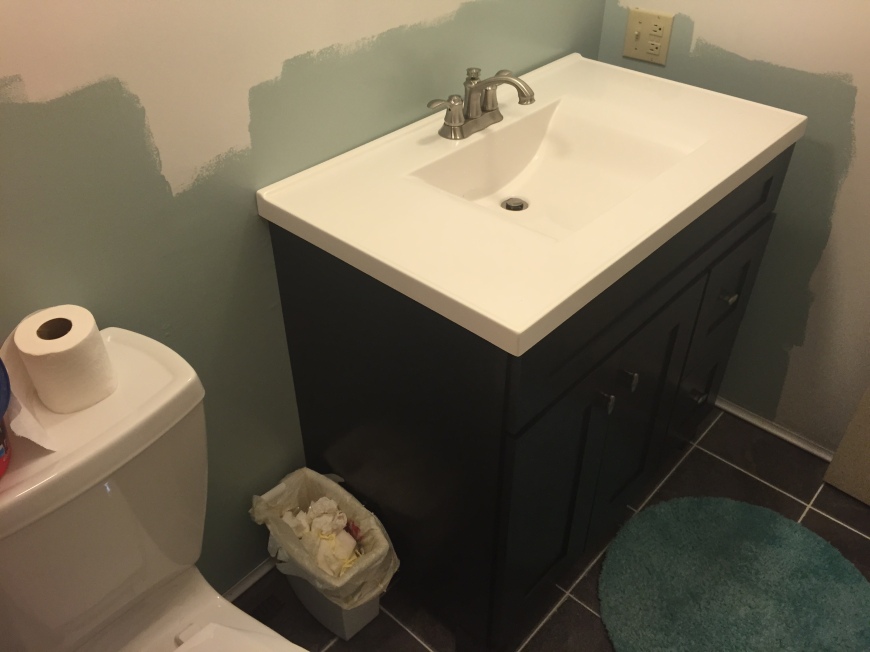 The new vanity and countertop.  This… is a bit more of a problem.  Everything you can see is not leaking, is hooked up, and works beautifully.  Note that I also put new floor trim in, although you can’t see it too well.  It’s just trim; trim’s not actually terribly impressive.  But it’s there!

Closeup of the countertop and the new faucet.  I love this countertop a LOT.  I’m also glad that the vanity is taller than the old one, because it means that the boy’s going to have to grow a bit before he’s tall enough to splash water out of the sink, and hopefully by then he’ll be less likely to wantonly splash stuff around.  Yes, the distance from the faucet to the electrical outlet is within code; yes, I’m also putting safety stops into the outlets when they’re not being used.

This shit right here is not my fault.  And it’s leaking.  (And it’s better than it looks, because that one PVC join that is obviously crooked is not crooked any longer.)  The supply lines to the faucet are working beautifully and appear to be watertight; the rest of it, not so much.

Basically it’s leaking at the one spot that is obviously bad, which does not surprise me, as joining those two pipes in that fashion was basically a kludge involving crossed fingers.  The PVC-galvanized join is strong and so is the join where the trap joins with the pipe coming out of the wall.  I need to talk to some folks who know better than me and come up with something better than the kludge.  I also need to fix a new leak that popped up by the drain that wasn’t there originally, because in all the screwing around with the pipes I accidentally loosened the top (blue) pipe too much and now it’s leaking too.

I will wait a few days, do some research and some thinking, and then take another shot at this, and if I can’t get it right the second time I’ll just suck it up and call a plumber.  I’m not actually upset about this; it’s leaking at a spot that I knew was dodgy and it’s not leaking enough that it renders the sink unusable.  If I need to wash my hands or my face in that sink, it’ll be fine; the pot underneath will catch the small amount of water that comes out.  I just want it perfect.

Later this week, we’ll get into what Phase 3 entails.  Phase 3 is the final phase.

My Tweets
Join 20,953 other followers