This is not a joke: I spent $170 on a pillow yesterday.  And, while I probably wouldn’t have done it had I not just had a birthday and received surplus money from it, I do not feel bad about my purchase.

I have slept on it once.  It is possible that I’ll update this after I’ve put it through its paces for a couple of weeks, but I figure one night is probably enough to have an idea of whether the pillow is a pillow or not.  And when I woke up at 6:30 this morning, before my alarm went off, I woke up fucking refreshed.  Which qualifies as a minor miracle, as I’ve been having a hell of a time getting out of bed lately.

Here is the deal, guys: I have no idea what this pillow is made of, and the description on this website is not super helpful.  What I can tell you is that I wish to hell right now that I had access to an infrared camera, because this goddamned thing is made of magic and violates the laws of physics.  As far as I have ever understood, cool things that are not being actively refrigerated somehow or pumping out heat are going to assume the ambient temperature of whatever space they’re in sooner or later.

This pillow’s made of foam.  There’s nothing in there to disperse heat.  And yet it’s cool.  It’s always cool.  It’s in my bedroom right now, and while I’m no better than you are at determining temperatures by touch I’d bet it’s a good ten degrees cooler than anything else in the room.  And when you lay on it?  It stays that way.

Yes, I know that’s impossible.  And yet I tell you that I slept on this fucker last night and that if I laid in the exact same position for a while the pillow might assume the same temperature as my face eventually, but that if I rolled over the “warm” part would be back to being cool again within a minute.  It was surprising.  You should see the looks on people’s faces when they touch this thing.  I don’t know how it works.  It shouldn’t work.  And yet somehow it does.

I’m itching to buy another one so I can cut it in half and see what’s going on in there.  But right now this is literally the best pillow I’ve ever seen/touched/slept on, bar none, ever.  It’s magic.  Y’all have been around here for a while. Do I seem like the type to handwave stuff away like this?  I have no fucking idea how it works.  It shouldn’t work.  But it does.  So, until I find out otherwise, magic.

Regarding the airflow thing, actually: notably, the pillow was not noticeably cool to the touch when I first removed it from its packaging: a sealed plastic bag inside a cardboard box.  I am betting that, in an airtight environment, the cooling effects won’t work.  It took no more than a couple of minutes outside the box before its temperature dropped.  Speaking of reasons to use an IR camera… There’s not, like, an app for that, is there?

Find this pillow and buy it, guys.  You will evangelize for it too.  I swear.  More later if I’m able to science this shit out somehow. 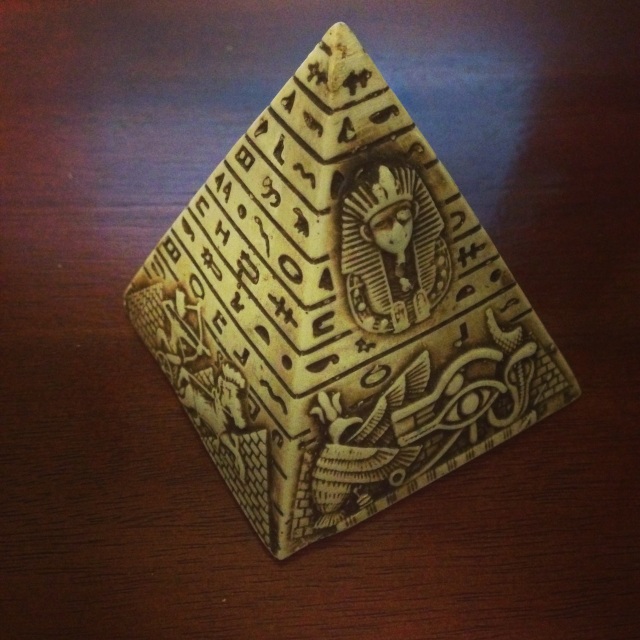 My wife found this weird-ass thing under a tree in our front yard last summer, and I just noticed it again.  I’m vaguely disappointed that no eldritch horrors ever spewed forth from it to destroy my house.

This one’s interesting. Same kid as last time; he’s actually got it together a little bit more at the moment, most likely because I glued myself to his side the second he got to the board and coached him through when he needed it. The problem in question is 8 5/12 + 11 1/4; note a few things:

1) Correctly adds eight and eleven to get nineteen. This represents progress!
2) Recognizes that 1/4 needs to be converted to twelfths in order to add the two fractions, and– amazingly, to my mind– that he needs to multiply the numerator AND denominator by three to achieve this, and then does so correctly;
3) Successfully adds five twelfths and three twelfths to get eight twelfths.
4) Spells “mark” as “mork.” Can’t win ’em all.

Then an interesting thing happened. I asked him if he needed to do anything with 8/12 and after thinking for a second he came up with the word “reduce.” However, despite having just multiplied three and four to get twelve, he absolutely could not figure out that he needed to divide by four, nor could he successfully divide either eight or twelve by four. Note on the far left of the picture, where he’s tried to divide it, figured out that four goes into eight twice, written the eight underneath the other eight without actually putting a “2” at the top of the problem, subtracted eight from eight to get zero– and then informed me that eight divided by four was zero.

(gets interrupted by customers, promptly makes a subtraction mistake while redeeming tickets)

Harder to read is at the bottom of the picture where he tries to divide twelve by four. He first thinks the answer is two (but doesn’t write it up again) then borrows from the ten digit so that he can make the ones digit… twelve, again, which is where I stopped him and pointed out that he’d already gotten that answer by multiplying.

Note also the rogue seven near the last division part. I don’t know why that’s there, but it’s intentional; he said “seven” when he wrote it.

Clearly we need to work on long division a bit. It’ll be interesting to see how many other issues that ends up clearing up.