(Note: this is as close as I’m going to come, I think, to a post about Ruth Bader Ginsburg, mostly because I still can’t think clearly about it. Check my Instagram for a minor tribute to her that I did, though.)

I turned eighteen in July of 1994, which means that my first presidential vote was for Bill Clinton’s reelection in 1996. Since I have been old enough to vote– and I am 44– there has been only one election where the Republican candidate for President got a majority of the popular vote. For some reason, though, there have been twelve years in that time where I had Republican presidents– because in two other elections, the winner of the popular vote did not win the Electoral college. And I’m not going to do the math to figure out the exact numbers, but during those years where I’ve been able to vote there has– I will use the word frequently— been situations where the balance of the Senate and the House did not reflect the number of votes received by the elected officials of that party as well.

The Republicans have been given a head start in our democracy for my entire adult life. The Republican agenda does not enjoy popular nationwide support, but their power in our government is aided by the Electoral College and a Constitution that says every state must have exactly two senators– a compromise that might have made sense in 1789 but no longer really does when California literally has nearly seventy times as many people as Wyoming but only eighteen times as many electoral votes.

The following things need to happen:

You may be pointing out in your head right now that this does not precisely solve the problem of the Electoral College, and furthermore does not really reflect the enormous advantage smaller rural states have in the Senate, allowing them to potentially block legislation desired by overwhelming majorities of Americans. This is true, and I don’t see a way to overcome that roadblock short of setting a ceiling for a state’s population and carving a few of the bigger states up, which doesn’t seem super likely. But we can limit the antidemocratic effects of the Electoral College without a Constitutional amendment.

How? By increasing the size of the House.

The Constitution does not specify how many seats the House needs to have, only that the number of citizens per seat should be no less than 30,000. I think we can all agree that a House with nearly eleven thousand members is untenable for a variety of reasons. But there is nothing in the Constitution that requires the number of House members to be 435. It used to be fairly routine to expand or change the number of House members– 21 times between 1790 and 1920, which is the last time it happened.

Which, okay, a lot of those were because we added new states. True! But I feel like a hundred years was a nice long run for 435 members and maybe expanding to, oh, twice that might be nice.

(Be aware, because people seem to think this is a good argument for some reason, that I don’t give one thin damn how many desks there are in the House chamber. That’s a building. We can renovate the motherfucker. We can build a whole damn new one if we want.)

And doubling the size of the House would, in turn, double the number of available Electoral votes, which– again– wouldn’t fix the problem, but would bring the vote of a Californian closer to being fairly counted than it is now.

Now, understand that there is an argument to be made that if California has seventy times as many people as Wyoming then it deserves seventy times as much representation. It’s probably even the cleanest argument, honestly, because everything else boils down to well, California needs to have closer to a truly representative vote … but not that much closer. But even if we just doubled the size of the House– and I don’t think it’s unreasonable to have 8-900 voting members in an organization representing three hundred and twenty-five million people– we would in turn close that distance and the vote of a Californian would be closer to counting as much as it should. It’s not going to be perfect, because of the Senate, and we can’t fix the Senate (or at least I’m not aware of a way) without Constitutional amendments, which is outside the scope of what I’m talking about right now.

Our democracy, such as it is, and believe me part of me wants to put that word in quotation marks right now, needs to be more representative than it is right now. This won’t fix it, but it’s a place to start.

Y’all, damn near any educated person could have predicted this, and most of them have at some point or another. You don’t have to be an epidemiologist or even a doctor to realize that the most dangerous kind of virus for causing a pandemic is the type that 1) has a lengthy period where you are contagious but not symptomatic and 2) has a relatively high mortality rate once the symptomatic period begins. Literally everyone who has ever read The Stand or seen a movie about a disease could have put this together. Fucking Dan Brown predicted it in his last book, and he’s a damn idiot. It’s not that fucking complicated.

Furthermore, if the person currently running our country into the ground is able to fire something called a “pandemic response team” and if there is something called the Center for Disease Control whose budget he is able to cut … what that means is that yeah, people predicted this. There are entire fucking literal organizations composed of people whose actual fucking job was to predict exactly this and to notice it as early as possible when it (inevitably, because viruses evolve, which is also something no educated person is surprised by) does actually happen.

If something terrible were to happen and everyone were to look around and no one could figure out whose job it was to help fix that thing? That might be something that nobody predicted.

This? Everyfuckingbody predicted this was going to happen, sooner or later. Everybody who was paying the slightest bit of attention, at least.

Spent the day at home with the boy, who hasn’t been at school for the last couple of days. Most of the time when he’s sick my wife is able to work from home, but she wasn’t today on account of various Meetings What Could Not Be Emails. I am mostly feeling better; my voice has more or less recovered, although I do have an annoying throat cough still lingering.

I’ve spent most of the day in a state of vague horror at the world, honestly, both as various places and institutions either do or don’t react to the continuing spread of the coronavirus. It’s an open question as to how my district is going to react to it; attendance has been shitty for several weeks now and I suspect it’s only going to get worse, and I’m absolutely certain that there are already students in our buildings who are carriers; if there aren’t, there will be by the end of the week. Meanwhile, you may be aware there’s another batch of primaries tonight; I’m sure that won’t cause any particular stress.

I dunno. Despite everything I’ve always been a person who more or less feels like most people are basically competent and trying their best, and that brings with it a certain amount of trust in institutions, something that really should have been bred out of me by now. And what frustrates me about this is that no one anywhere, from national governments on down, who has any sort of a plan for how to deal with this shit before it gets much, much worse. Like, I’m hearing about schools that have confirmed cases shutting down for two weeks. Well, okay. What happens when in two weeks the epidemic isn’t over and you have another student test positive? Do we shut down for another two weeks at that point? How many times do we do this?

On the I Know Nothing About Politics front, I suspect Sanders is going to be in an awful lot of trouble after tonight’s primaries are tallied, but I got this wrong last time too, so we’ll see what happens. Lord knows the fucker won’t be dropping out anytime soon one way or another. 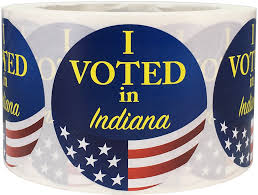 I will be voting a straight Democratic ticket, with the exception of my local Congressional race, which does not feature a Democrat to vote for.  I will instead be writing in Pat Hackett, who I voted for in the primary.

I will be voting for Oletha Jones over Stan Wruble for School Board.  I have nothing in particular against Mr. Wruble but my preference is to not vote for white men when I have an alternative, and in this case I do.

I will be voting no on Public Question #1, which doesn’t actually literally read “Is it OK if Republicans deliberately force a budget crisis and then steal the pensions of Indiana’s public servants in order to fix the problem they created?” but may as well.  I very strongly recommend every Hoosier vote against this fucking nonsense.

I have no plans to vote for or against any judges.  I honestly don’t have time for this shit and, more importantly, I lack any relevant expertise and therefore I’m not qualified to make decisions here.  I did some brief research on each of the judges up for retention votes (which are always successful; they never lose these things) and found no giant blinking red lights so I will ignore these questions as usual.

I will, once again, almost certainly not be receiving a sticker.

John Kerry broke his leg while cycling in France today, and it got me wondering: What level of bodyguarding/security do we provide people like upper-level Cabinet members and members of Congress when they go overseas?  The article mentions Kerry’s motorcade but doesn’t give any indication of who was in it.  Does the Secret Service handle stuff like that, or do they just work with the President and VP?

Yes I know I could Google this.  I’d rather ask y’all; somebody out there knows.