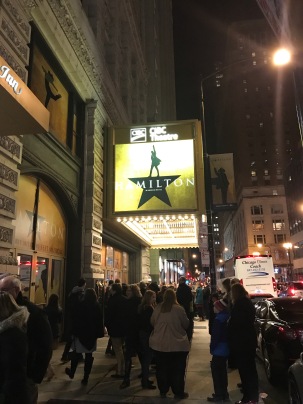 Ask me to name my heroes and two names will come to mind very quickly: Malcolm X and Abraham Lincoln.  I’m always interested to see how fast people catch the fundamental similarity between the two men: they’re both damn near entirely self-educated.  I’ve had more than my share of formal education but in a lot of the things I find important I’m an autodidact, and it’s a quality I deeply respect in people.

Which explains my attraction to Alexander Hamilton, or at least the version of him that Lin-Manuel Miranda has created in HAMILTON.  I mean, the fundamentals of the story are basically correct, and Hamilton is undoubtedly a supreme autodidact, but he’s not quite up there with my heroes mostly because, while I’ve read tons of speeches and writings by Malcolm X and Abraham Lincoln, I’ve mostly read stuff about Hamilton, and that represents an important difference to me.  At least at the moment.  I need to reread the Federalist papers sometime.

Writing is torture.  Having written is the purest bliss.  🙂

Anyway.  We went to see HAMILTON for our 10th anniversary a week ago and somehow I haven’t talked about it here yet.  Walking in, I had large portions of the soundtrack memorized and my wife was at least reasonably familiar with the whole thing, and I think both of us were concerned that the cast being “wrong” might impair our enjoyment somewhat.  I’m glad to report that that concern was basically nonsense; my wife actually walked out preferring the Chicago cast, or at least their voices.   I wasn’t quite there, but I spent some time raving about the performance of Jonathan Kirkland, who plays George Washington.  The guy’s physical presence is outstanding; he towers over the other actors in the show, and he does a tremendous job embodying someone who was so personally forbidding that Hamilton himself once actually made a bet with a fellow Constitutional Convention-goer about whether he was brave enough to slap him on the back.  The “son” scene in Meet Me Inside was so much better than I’d thought it was going to be from the soundtrack.  Washington just stares at Hamilton, and Hamilton folds like a cheap suit.

I mean, okay, not surprising that I liked seeing the most successful Broadway musical of my lifetime live, but still: I know the tickets are expensive, but if this show is near you?  Go see it.  It’s worth it.

6 thoughts on “On HAMILTON”