Th’boy’s been home all week because the Great Poop Suspension led directly into a bout with diarrhea that has flung my wife into a pit of howling madness where all she does is monitor the consistency and regularity of our toddler’s toilet deposits.  I, as a caring father and husband, would love to be home with her to help with this, and would love to have taken over for half of it, but… something something my job is important for some reason, and also lesson plans.

Anyway, the boy found Bo on the Go, and I do not like it very much.  This is Bo: 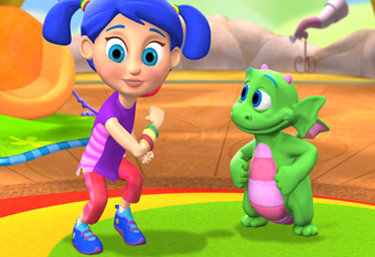 Bo has an insanely annoying voice that, combined with the animation style of the show, reminds me of Super Why, which I hate.  Therefore I hate this show, because things that remind me of Super Why are awful and I hate them.

I also have a lot of trouble paying attention to it.  Like, there’s a dragon there.  She’s got a dragon with her sometimes, I don’t know why.  The dragon’s probably got a name and it probably does things, but this show is too awful to pay attention to dragons.  You can Google it if you really need to know his name, I guess.

Here’s what I do know about the show: Bo likes to insert her own name into normal phrases every so often, which is terrible and arrogant.  Like, things are “Super-Bo-riffic!” because that is a thing people say and not a sign of runaway narcissism.  Occasionally things are “Easy-bo-breezy.”  She calls the people watching her show “Bo buddies.”  That’s also terrible.  This is the theme song.  It sucks:

(I couldn’t find a copy of the actual theme song; this will have to do.)

Anyway, Bo does stuff; I don’t know what she does or what her problems are.  I do know that every so often she “runs out of energy” and that unholy bracelet on her arm starts blinking.  At that point she demands that her “Bo buddies” provide her with “Bo power” and she insists that they start doing something, like running or jumping up and down or spinning around or, hell, I don’t know, masturbating or something.  And then that fills up her little meter to green and then she can go on with whatever she was doing.  I assume she solves problems somehow.  People on kids’ TV are always solving problems.

As far as I know she never takes off the bracelet.

Anyway, she spends more time than any other character in a kids’ show I’ve ever seen bossing around the audience.  Like, there’s an episode on right now, and she’s demanding that the kids watching the show clear a space out in front of the TV.  Now she wants them to spin.  The boy has done neither of these things.

“I can feel your energy!” Bo says.  I hate the way she says energy almost as much as I hate hearing Wyatt say problem.

So, what’s she doing with the energy, do you think?  Because that’s the part I want to know.  The public front of the show is that she’s trying to get the kids to move and exercise and all that, because healthy, but she’s a tv show, and the moppet above notwithstanding, the kids aren’t moving.

Bo is a vampire.

They just want you to think this is a show about healthy eating or exercise or whateverthehell.  Bo is an energy vampire.  She is stealing our kids’ life essences with her creepy tricolored bracelet and I don’t know what it is being used for but it is almost certainly pure evil.  This energy is being used to fuel Donald Trump’s hair somehow.  I know it.

EDIT:  Not a joke.  This happened just as I was fiddling with tags.  My wife is at the grocery, enjoying a few minutes of blessed solitude without our rectally-challenged toddler at her side:

2 thoughts on “Creepy Children’s Programming Reviews: BO ON THE GO”