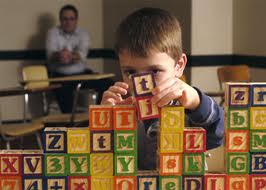 I have a handful of severely autistic students.  One of them in particular has been a major behavior issue as of late– he’s been running out of the classroom, throwing things, saying crude sexual insults to the girls, and trampling people in the hallway.  We are trying, for a variety of reasons, some good, some not so good, to keep him in our building and not have to move him into a residential placement of some kind somewhere else.  His issues generally begin when he gets into the building, amplify during Success period, and by the time he gets into my room for Math he’s completely uncontrollable and acting out.

I met with the corporation’s autism consultant on Thursday, and she was in my classroom observing me/him/us today.  (Sidenote:  all three of my classes killed their math tests this week; I’m super happy about how they did.)  We’ve been working on solving two-step equations and linear equations for the last few weeks, and so they’ve been hearing me say the phrase “work backwards” or “do the opposite” over and over and over and over again.  (In other words, 4x = 12 is a multiplication problem; you need to do the opposite, division, in order to solve it.)  Well, everybody but this kid has; he’s spent most of his time either sitting in the hallway or in the main office or the counselor’s office.

He had to take the same test as everyone else, so the autism consultant and his usual paraprofessional worked with him in the back of the classroom.  I heard them repeating my instructions and going over procedures to solve problems, mimicking the language I’d been using.  The kid actually did pretty well.

For the last ten minutes of class, the autism consultant and the paraprofessional disappeared for some reason and left the kid in the room with me.  I noticed after a minute that every time I gave the class an instruction he was doing something else.  Oh, great, I thought; last thing I need is a meltdown when the two people who are here to observe him have left for two minutes.

“The opposite,” he said.  “They said I’m supposed to do the opposite of everything you say.”  Big, shit-eating grin on his face.

He sat in his seat.

“Make as much noise as you can until the bell,” I told him.

Out comes his math workbook.

Ah, autism.  Every day can be Opposite Day from now on.

The broken tree is gone.  All hail the broken tree!  The guys did such a good job they even took away the broken branches from the last big storm we had, over the summer, which I had hauled off into a corner of my yard and not bothered to finish bagging up and curbing.  The company is called, believe it or not, Skeeter’s.  If you’re in northern Indiana, you should use them the next time something falls down around your house.

(Sidenote: there’s a good lesson in why internet reviews can be a shitty idea here, where someone who perhaps should not be allowed to have an opinion appears to believe that tree doctors are a cabinet company.  Uh, no.)

8 thoughts on “Well, whatever works, I guess…”